No one on their deathbed ever said, “I wish I had spent more time alone with my computer!”. 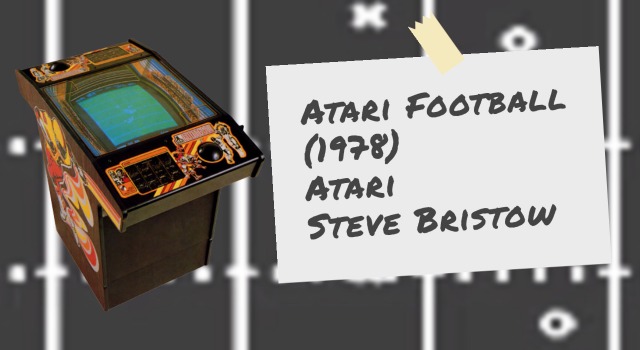 Atari Football is released to arcades by Atari in 1978, drowning out everything else as over-excited players slap its newfangled control method, the trak ball, into submission. Designed by famed Atari mechanical engineer and controller designer Jerry Lichac, it is a large black rolling ball sunk into the game cabinet. The faster it is swept by the player, the faster his on-screen alter ego “runs”. The game was originally conceived in 1975 by Steve Bristow, with the title X’s and O’s. Bristow abandons the game to make Tank, and the game is later resurrected by Dave Stubben and Mike Albaugh, with additional help from Lyle Rains. Introduced for the first time in Atari Football is a playfield that scrolls beyond the borders of the monochrome screen, allowing plays to run the entire length of the simulated gridiron. It is also the first game to portray its sport in an even remotely realistic manner. While the on-screen teams are represented by the former title character X’s and O’s (in the tradition of actual football playbooks), players on offense can choose between four running and four passing plays, the defensive player with 4 defense plays, all chosen with buttons on a panel-mounted menu. No kicking plays allowed, however. The game also features a unique buy-in scheme Atari dubs Add-a-Coin; in addition to the game’s original allotment of 1.5 minutes, additional time can be bought with more quarters. 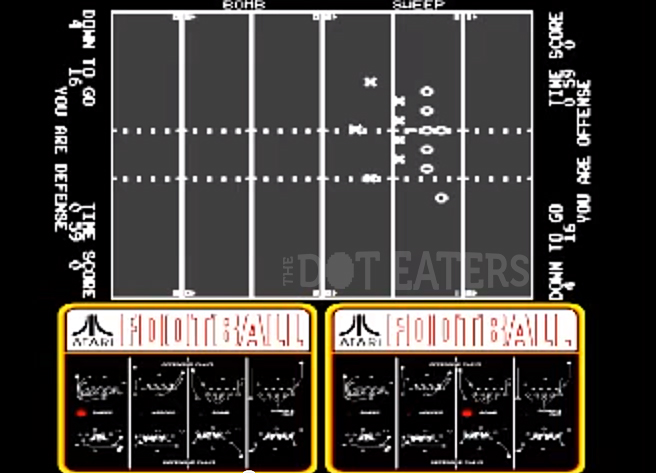 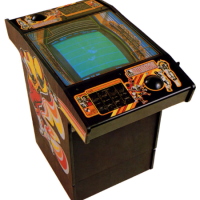 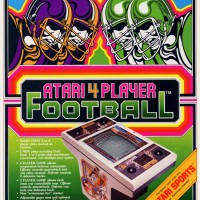 Instigated a lot of bar fights 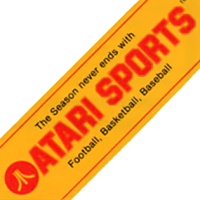 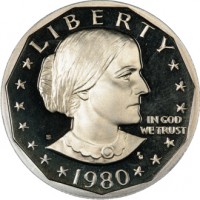 The stern profile of Susan B. Anthony

As unique and seemingly made for such a physical game as the trak ball is, Atari head Nolan Bushnell thinks the controller too expensive to include in the design of Atari Football, and that joysticks should work just fine. Albaugh has to threaten to quit in order to include the rolling ball. He is thusly vindicated when Atari Football is a smash hit in the U.S., at least during the U.S. football season. Arcade phenomenon Space Invaders rolls into town towards the end of 1978 and quickly steals the ball. While the original is a two player game, Atari releases a four player version the next year creatively titled Atari 4 Player Football, done by Ed Logg. In the 4-player, co-operative mode, the two players on each side share offensive and defensive duties between their two trak balls; one controls the quarterback and wide receiver, the other the defensive backs. Other improvements include a scrimmage line marker, as well an expanded choice of plays, including the ability to kick the ball. The game can also fall back to 2-player head-to-head mode, as in the original. Atari Baseball and Atari Basketball, each fitted with their own Trak Ball, soon follow. Atari 4 Player Football returns to the field in a limited edition for the 1980 football season.

Another new addition to the 4-player version is a separate coin slot for the ill-fated Susan B. Anthony dollar coin, first rolling out of the Philadelphia Mint on December 13, 1978. Pressings of the coin would halt in 1981, and then start again for a short run in 1999. Being one of the most unpopular coins ever struck by the U.S. Mint, it’s doubtful that many of them, bearing the severe profile of the woman’s suffrage campaigner, ended up tackling the coin box of Atari Football.