You are in a maze of twisty passages, all alike. 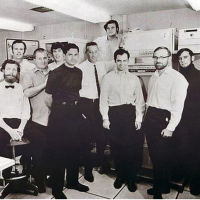 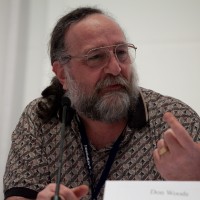 Adventure aka ADVENT aka Colossal Caves is the next logical evolution of computer games, a complete text-based adventure game by Willie Crowther. It is written in FORTRAN on the venerable PDP-1 in 1972 while Crowther is working for Bolt, Beranek and Newman, Inc. (BBN). The Cambridge, Massachusetts company  is made up mostly of MIT students, and is awarded the contract to develop the ARPAnet for the U.S. government, a scheme to create communication and data links between all facilities doing military research. Crowther is also part of the software team for BBN’s IMP, or Interface Message Processor, the original nodes used to connect the ARPAnet, which eventually evolves into the Internet. Crowther is inspired by the new fantasy themed paper-and-dice game Dungeons and Dragons which is extremely popular with the university crowd. More inspiration comes from his adventures as an avid spelunker. In Adventure, you must explore the vast Colossal Caves and return to the starting point with as many treasures as you can. The locations are based on his and his ex-wife’s exploration of the Mammoth Cave system in Kentucky, and their divorce is further impetus for Crowther to fill his time programming the game. Some fanciful D&D type magic is added into the mix for good measure. In 1977, at the Stanford Artificial Intelligence Lab at Stanford University, the game is expanded on by Don Woods, with Crowther’s permission. The original parser in the game is a rudimentary “verb-noun” structure, but the location descriptions are very compelling. Again, access to the mainframe running the program through the ARPAnet allows the program to become very popular among university students across the country. 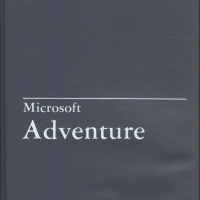 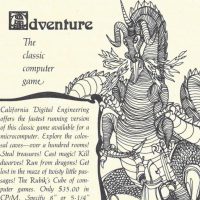 A version of Adventure, by California Digital Engineering, 1982 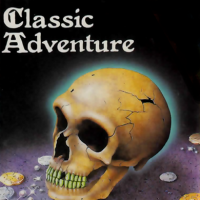 Classic Adventure, a version of Adventure released in Europe

Adventure, in fact, becomes one of the most influential programs in computer and video gaming history. It would set the template for online multiplayer gaming in the form of MUDS and MOOS, allowing people from across the world to come to together, form communities, and embark on adventures together. For a shortlist of developers who are inspired by Adventure to beat a path to the burgeoning personal computer and video game scene:  Scott Adams creates Adventureland in the wake of playing the original, going on to found Adventure International. The MIT graduates of Infocom, who parlay their interest in Adventure into the seminal Zork interactive fiction series as well as dozens of other text adventures. Gordon Letwin, while working for Heath and authoring the HDOS operating system for the kit computer company, adapts the PDP-10 version of Adventure for microcomputers. Later, as one of the original 11 employees of Microsoft, he develops it into Microsoft Adventure for the TRS-80, and it becomes an early consumer product of the company in 1979. No less than Nolan Bushnell, the father of the video game industry, is a fan of the game in the early 70’s. There are other, countless players who fall into the time sink of Crowther and Wood’s world of exploration, and then set off to blaze their own trail in the industry.

“Adventure Games.” 80 Microcomputing, Jan. 1983, p. 398. Meanwhile, Gordon Letwin, then with Heath and author of HDOS, was working on Adventure, completing it in 1979.
Bushnell, Nolan K. “Of Muds and Moos” Electronic Entertainment, Sept. 1994, p. 112. Do you remember your first role-playing game? I do. It was back in the 1970’s, and the game was called Colossal Cave.
Image of Don Woods in 2010 from bencollsuss’ Flickr photostream
Don Wood’s Home Page
The Colossal Cave Adventure page
Adventureland

Web-based version of Adventure, with a slight graphical component