When it becomes apparent to Mattel that their system is on the road to success, they begin hiring designers and programmers to produce games in-house. But, spurred on by the personnel shake-ups happening over at Atari with employees leaving and forming independent game companies such as Activision and Imagic, Mattel keeps the game design department shrouded in secrecy and refuses to publicize the names of its members. In press releases and magazine articles, they are only identified as The Blue Sky Rangers, a name adopted by the group from their brainstorming process when trying to think up new game ideas, known as “blue-skying”. This secrecy extends even to Mattel’s own newsletter, titled Intellivision Game Club News. A winter 1983 issue features strategy game Utopia and offers an interview with the creator, referred to only as “the man who designed and programmed the game”. Thus is Don Daglow’s identity safely kept hidden from Intellivision users. 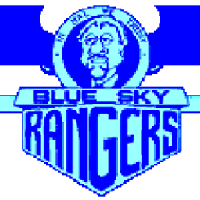 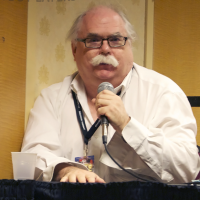 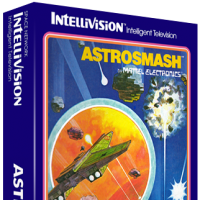 Box for Astrosmash, an action game for the Intellivision, 1981 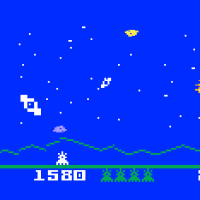 Starting with nine core members, the department eventually peaks at 200 at the height of the video game boom. One of the Rangers‘ creations, John Sohl’s action game Astrosmash, follows close behind Major League Baseball in popularity. It originally starts out as an Asteroids clone called Meteor, but the lawsuits in the air cause a shift in the focus of the game to a variation where rocks fall vertically down the screen at the player’s ship. Astrosmash features an innovative, self-adjusting difficulty level, where if the player starts losing ships the game will become easier…allowing for long game play, even for beginners. 984,900 copies of the program are shipped for the Intellivision, along with a later port to the VCS, making it the most popular of the Blue Sky Rangers‘ releases. Even an X-rated version is produced of the game, obviously for in-house consumption only with the none-too-marketable title Space Cunt.  The whole thing is a joke at the expense of a game made via Mattel’s license from Disney to make games based on their video game themed movie TRON. Designed for use with the Intellivoice speech synthesis module for the Intellivision (see below), Solar Sailer has a hard time pronouncing the word “can’t” correctly, and this becomes a running joke with the programmers. Space Cunt‘s title screen touts it for use on the Genitaliavision. Instead of rocks and alien craft, players shoot their “semen” at falling I.U.D. devices, birth control pills, and the infamous title character.

The Intellivision Has Something to Say

By 1982 the promised computer keyboard add-on is still MIA, but Mattel does introduce the $100 Intellivoice that year, scheduled for release in September. This device adds human voices played through the TV to games that support it. It utilizes a GI speech synthesis chip called the Orator, containing 16K ROM space for voice data. Speech is realized through a process called linear-predictive coding, where highly compressed recordings of human speech is stored on special cartridges, which the GI chip within the Intellivoice then replicates according to its internal pronunciation rules. Design and Development engineer Ron Carlson is in charge of hardware development of the device, with Ron Surratt writing the software. At GI’s voice lab in New York, the standard phrases to be contained in the Orator’s ROM are recorded, along with the voice data for the first Intellivoice cartridge Space Spartans. When Surratt receives the data at Mattel headquarters in Hawthorne, he loads it into the Intellivoice prototype hardware. But in demonstrations for Mattel executives and marketing personnel, the device can only say the unfortunate sounding phrase “Auk youuu!”, due to a hardware malfunction. 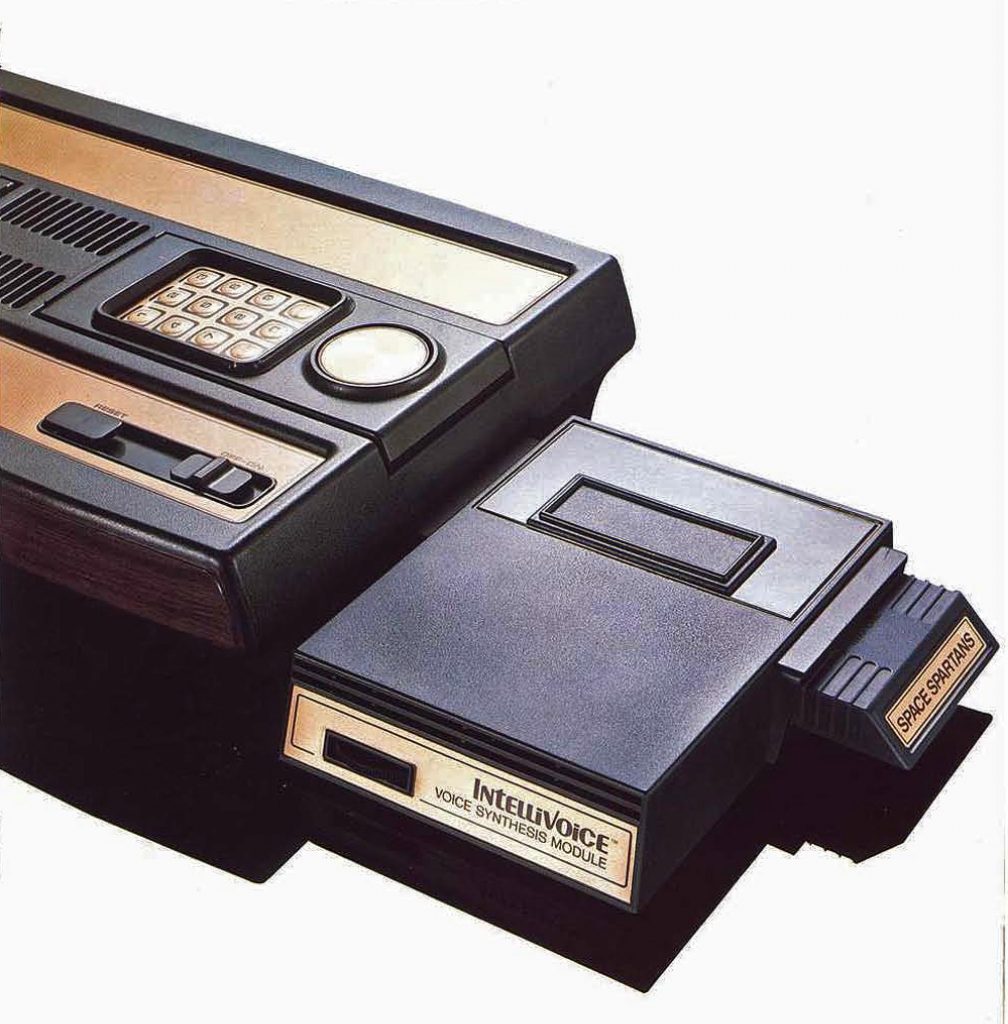 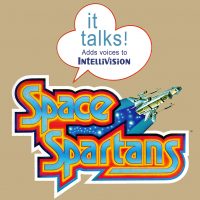 Space Spartans, a launch title for the Intellivoice, 1982 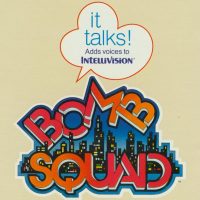 Bomb Squad, a launch title for the Intellivoice, 1982 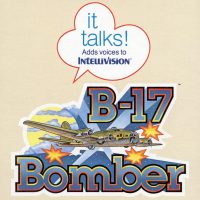 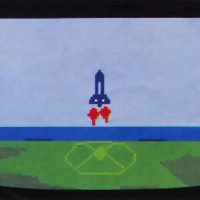 When the bugs are finally squashed out of the system, Mattel begins production of Intellivoice units and games. The add-on is plugged into the cartridge slot of the Master Module and can accept any type of Intellivision cart, although only those specially designed for the add-on contain speech. Even though Space Spartans is given double the ROM of the previous 4K Intellivision carts, it is still a very limiting space for speech synthesis, so all the vocal cues in the game except for the female computer are sampled at a low rate, greatly reducing their quality. The game is extremely similar in game play to Space Battle for the Atari VCS, with the player piloting a space fighter through a galaxy divided into quadrants, protecting space stations scattered throughout. With the Intellivoice, however, we get verbal information such as which stations are under attack and status conditions like what shape our forward shields are in. 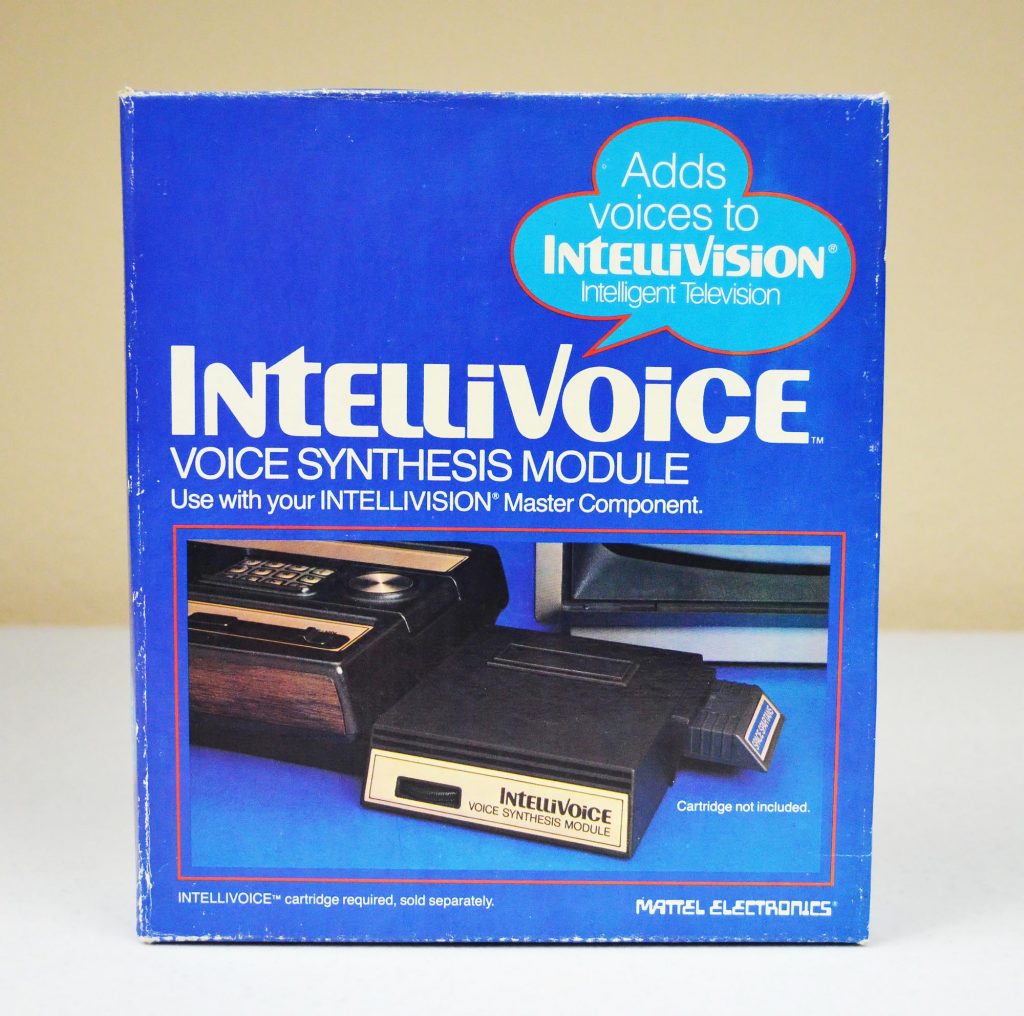 It Talks! Outside packaging for Intellivoice speech synthesis module, 1982

Along with Spartans, two other Intellivoice carts are initially released alongside the device:  B-17 Bomber and Bomb Squad. One of the products of Mattel’s Tron licensing deal with Disney, Tron Solar Sailer, is the final Intellivoice cartridge published for the Intellivision, released later in 1982. Space Shuttle is another Intellivoice game developed in 1983, featuring voices from ground control and another astronaut along for the ride. The game is previewed to the press during the 1983 Jan. CES for scheduled release in August, but is eventually shelved due to play value issues. World Series Major League Baseball (detailed below in ECS section) would be the last completed game for Intellivoice, although only for the Entertainment Computer System addon.

While initial sales for the Intellivision Voice Module and its first games are fairly good, it is obvious that while the public appreciates voice synthesis in their videogames, they don’t enjoy purchasing a new addon to get it. After a quick burst of orders for the new unit and games, sales slump. By 1983, Mattel is offering a free Intellivoice with the purchase of every Master Component at any Intellivision dealer. 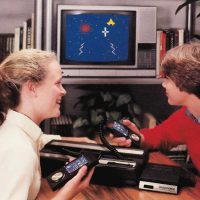 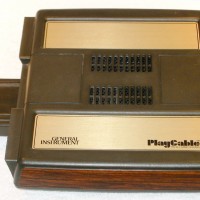 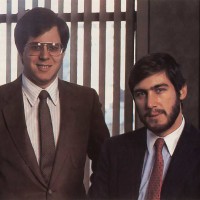 Jim Wiesenberg and Gary Smith of The PlayCable Company 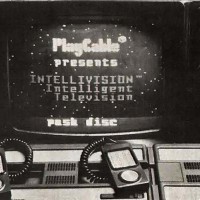 Also developed for the Intellivision is PlayCable, a joint venture between Mattel and The PlayCable Company. Introduced in 1981, it offers a 24-hour gaming service to customers via their local TV cable outlet. For $12 a month, a rotating schedule of 15 games is made available to subscribers who receive the General Instrument manufactured PlayCable Adapter box from their cable company and plug it into the cartridge slot of their Master Component. Into that goes their cable connection, and voila! Streaming videogames on demand downloaded to the adapter via a special data channel on the cable line. Baseball legend Mickey Mantle goes to bat for PlayCable in local ad campaigns, but the system struggles in the limited markets it is available, offered on only 15 cable systems two years after launch. The PlayCable module also suffers reliability issues. The games library is eventually upped to 20 titles per month but does little to improve the approximately one-percent subscriber penetration rate. The increasing demand for bandwidth for new cable channels, the system’s inability to play the newer 8K+ Intellivision games, and the collapse of the videogame market hobbles the system. After managing about 10,000 subscribers, the PlayCable scheme is shuttered in 1983.

And Now, the News

Mattel gains the license to produce home games based on Tron, a 1982 movie by Disney that sends filmgoers into the inner world of computers, facilitated by the most extensive use of computer generated imagery ever used in a film. To herald this, the company produces an eye-catching two-minute ad to accompany the film in theatres, promoting the first Intellivision Tron game, Deadly Discs, as well as other games for the system. It’s presented as a galactic news broadcast, with the newsreaders rendered in rotoscoped animation and applied with a pixellated effect similar to the graphics of the games.