Einstein would turn over in his grave. Not only does God play dice, the dice are loaded.

While your excitement about this might depend on whether or not you came of age watching cartoons in the movie theatres during WWII, Mattel announces in 1982 a deal with Walter Lantz Productions to produce games based on their well-known and well-aged cartoon character Woody Woodpecker, along with his fellow Lantz stablemates Chilly Willy and Andy Panda, among others. The Woody game, supporting Intellivoice, promises to terrorize unwary kids with a mechanical version of the title character’s maniacal laugh.  Intellivision owners get more good (and possibly more relevant to current audiences) news this year when third party manufacturer Imagic starts making games for the system. Imagic boosts the Intellivision library with product like Atlantis, Microsurgeon and Beauty and the Beast. As for the company’s biggest VCS hit Demon Attack, Gary Kato is in charge of porting Rob Fulop’s space shooter to Mattel’s console.  The problem is that the Inty version bears an even stronger resemblance to the 1980 Centuri coin-op Phoenix, to which Atari has purchased exclusive home video game rights. Thus the company, with its home version of Phoenix slated to hit store shelves in January of 1983, sues Imagic for copyright infringement. The two parties eventually settle out of court. 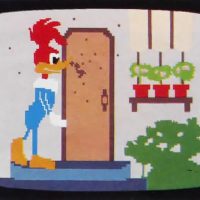 Honey! There’s a deformed, enlarged woodpecker at the door! He’s come about the reaping? 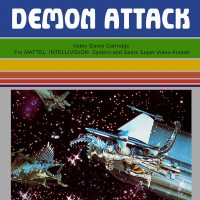 Demon Attack for Intellivision, which prompted a lawsuit from Atari, 1982 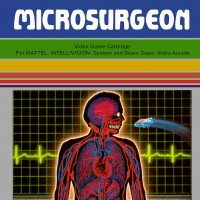 I eat your little craft with my horrific teeth! Microsurgeon by Imagic, for Intellivision 1982 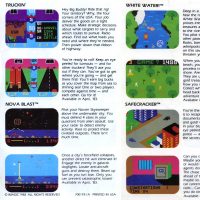 Some games for the Intellivision, by third-party game maker Imagic, 1983 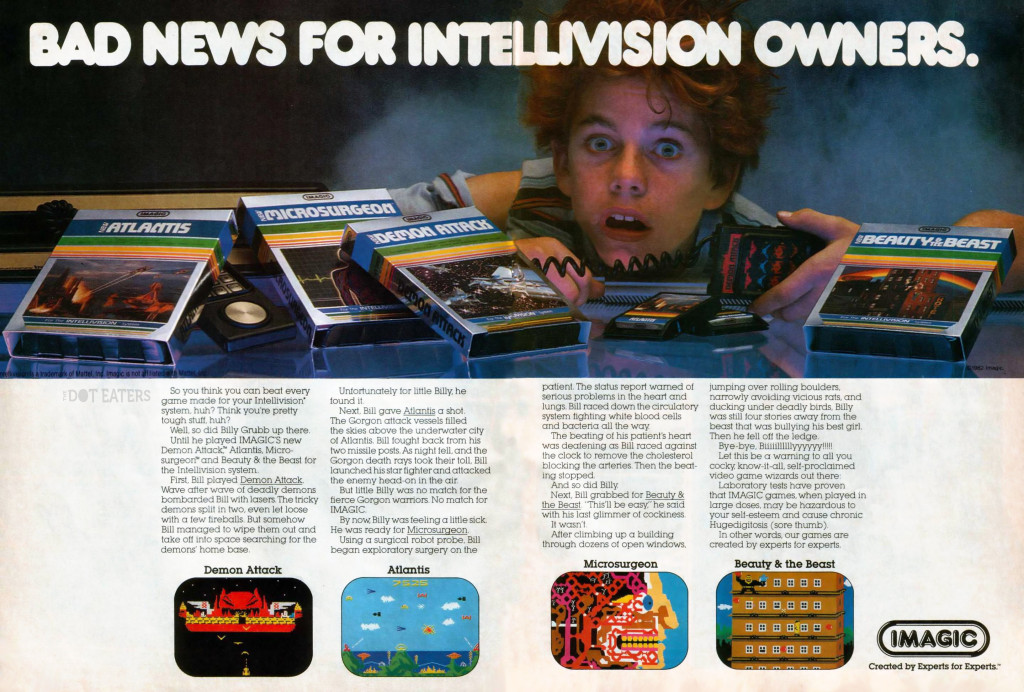 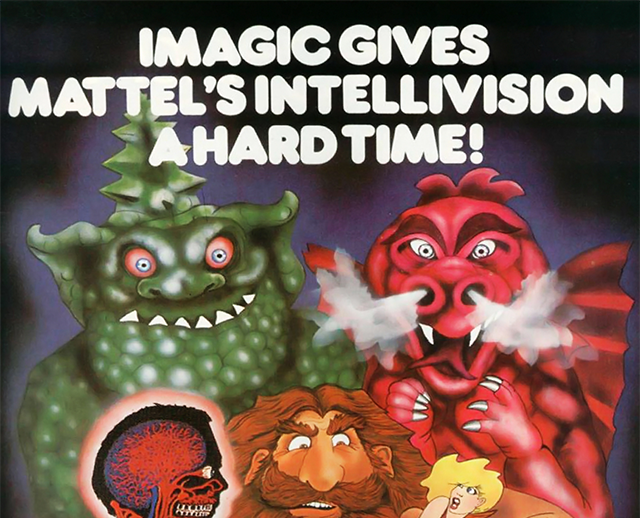 The bad news is, Mattel has been dogged with complaints from gamers that while some major urban centres receive cartridges of new Intellivision games in quantity, others city centers and less populated places in the U.S. are starved for content. And When Coleco releases their powerhouse third-wave video game system ColecoVision in 1982, Mattel suddenly finds themselves no longer the owners of the most graphically advanced game machine on the market. 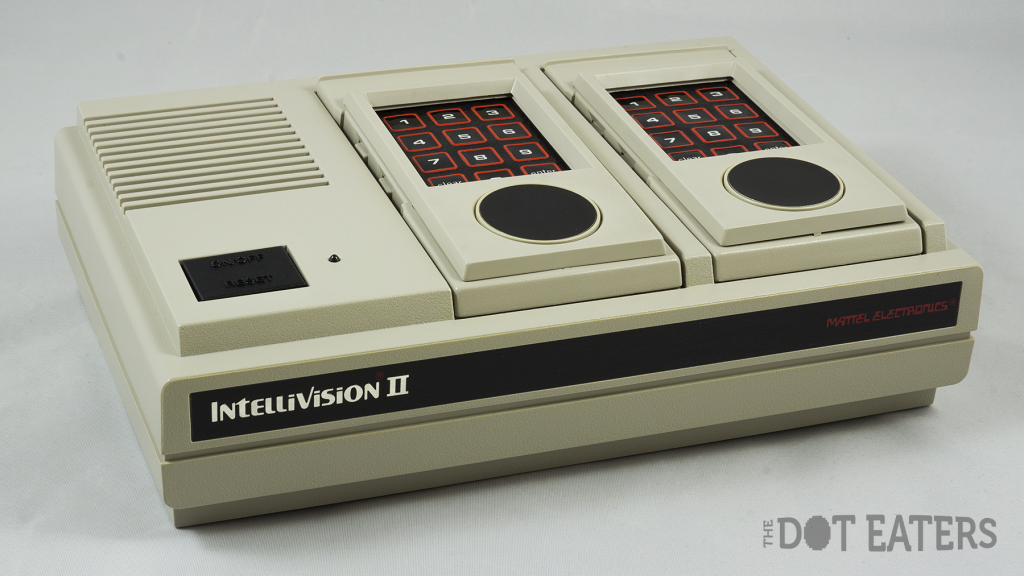 In an effort to refresh the sagging Intellivision line, they debut the Intellivision II at the 1983 Winter CES, as a replacement for the old Master Component which will be discontinued. Starting a process that becomes one of the major factors in the entire industry’s destruction one year later, the new system is more of a simple compact redesign of the same old technology than an innovative new product. In a slick new white box, the Intellivision II is cheaper for Mattel to produce, as the component list on the motherboard is streamlined. It retails for $99, with a few new improvements over the original. The controllers are now removable through joystick ports, facilitating their easy repair, and have longer cords so players aren’t quite so tightly tethered to the console. A LED light is placed next to the power button, to help prevent the machine being left on unattended. The power button is now dual-mode; after turning on the machine, a tap of the power button will soft reset the unit. Users must hold down the button for approximately five seconds to power off the Inty II. Along with these updated features, Mattel also replaces the pack-in game for the Intellivision II: the excellent port of the Data East/Bally Midway arcade blockbuster Burgertime.

Dignitaries cut the ribbon on the 1983 Winter CES, where Intellivision II, ECS and Aquarius computer are debuted. 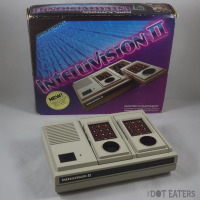 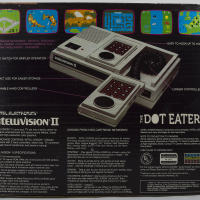 Rear of box for the redesigned Intellivision II 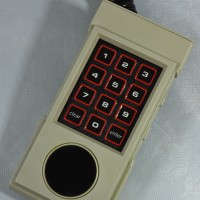 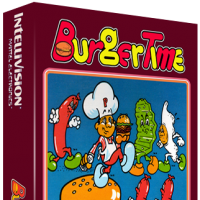 Cooking up some fun with the new Intellivision II game pack-in: Burgertime, 1983

Also added to the internal Intellivision II design is a video input along the cartridge port, allowing an interesting peripheral to be sold. Expansion System A is a box that plugs into the new Master Component and lets the owner play Atari 2600 games. Intellivision owners now have access to the largest library of video games on the market, touted by Mattel with the Intellivision II‘s tagline: “It’s got the most going for it”. Code-named Portofino while under development and eventually renamed System Changer, this add-on is actually a VCS clone in a box complete with Atari joystick ports and game select/reset buttons. It is also wired only to work with the updated Intellivision II; Mattel will provide motherboard modifications on the original Master Component to make it compatible with the System Changer if users take theirs to an authorized repair shop.

Spurred on by the System Changer, as well as Coleco’s Expansion Module #1 Atari adapter for their own ColecoVision, Atari starts to threaten lawsuits. It is helpfully pointed out that clones of the Atari machine are legal due to the off-the-shelf components and un-copyrighted software contained in them. Atari backs off, opening up the floodgates for various versions of the 2600 by other manufacturers. While the older version still works with Intellivision II, an update of the Intellivoice is planned and announced in 1983. Don’t let the pretty product shots of the new and improved speech add-on fool you, though. This mock-up is only a carved, painted and labelled block of wood. The device ends up eventually shelved by Mattel. 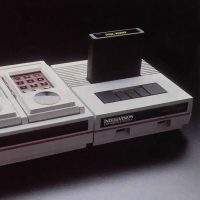 Yes, Virginia, there is Pac-Man on the Intellivision. With Expansion System A aka the System Changer! 1983 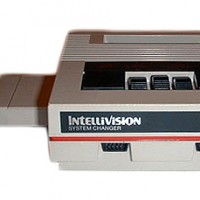 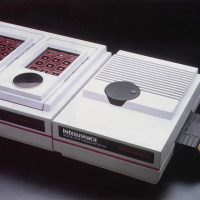 The upgraded Intellivision II Intellivoice, unreleased. This mockup is merely a carved piece of wood, 1983 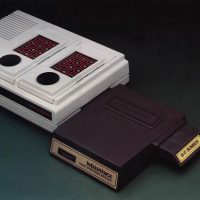 Don’t worry, the old Intellivoice works with the Intellivision II… although the coupling doesn’t look quite right 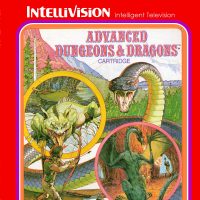 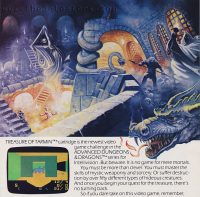 Ad for Treasure of Tarmin, an Advanced Dungeons and Dragons video game for the Mattel Intellivision 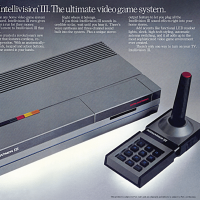 Later in 1982 the Intellivision game library expands again when Activision joins Imagic as a third-party manufacturer making games for the system. Their first offerings are ports of Bob Whiteheads’s Stampede, as well as David Crane’s immensely popular Pitfall!. Activision’s translations to Mattel’s console don’t bring anything new to the table, however, as they are merely duplicates of the VCS versions. Intellivision owners will have to wait for Activision’s console-exclusive creations for their system, with product like Worm Whomper by Tom Loughry, and Carol Shaw’s Happy Trails. 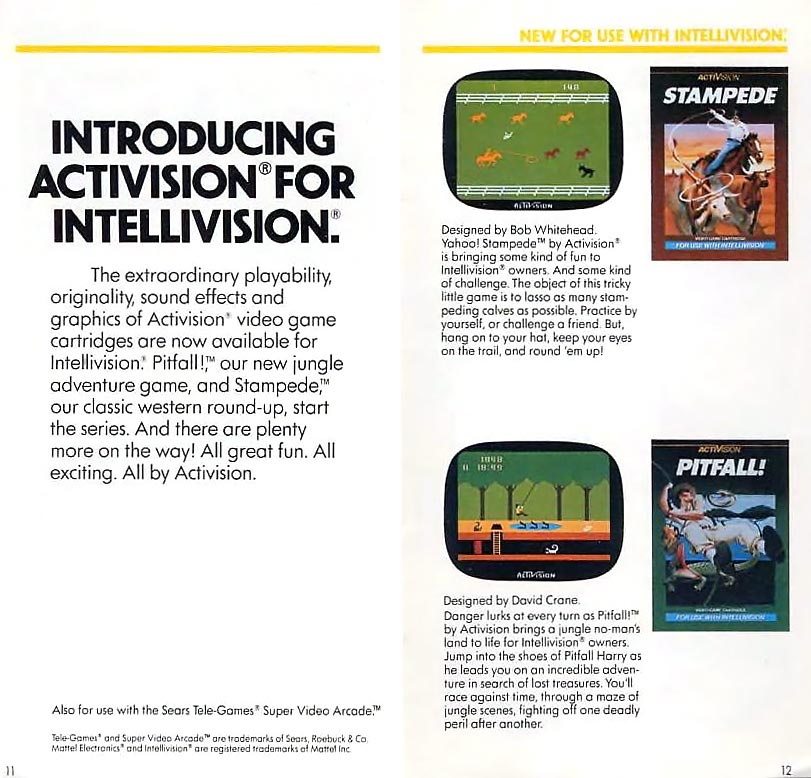 Activision games for Intellivision? The Devil you say! Fall, 1982

Also at the 1983 winter CES in January, Mattel announces a real technologically advanced addition to their Intellivision line with the Intellivision III, to be released in the fall with a suggested retail price of around $300. It is intended as a bulwark against the ColecoVision and the new Atari 5200, with graphical capabilities that surpass its rivals. The Inty 3 has approx. 12K of ROM and 10K of RAM, and sports a screen resolution of 320 x 192 pixels, compared to 256 x 192 for the other two next-gen systems. It can also handle 64 sprites on-screen at a time, whereas Coleco’s unit can only handle 32 and Atari’s system a measly five. The Inty 3 will also include microwave wireless controllers with real joysticks, a multi-coloured LED status display on the case, built-in voice synthesis and an automatic TV/Game switcher similar to that offered in the 5200. Not to be left off the shopping list of new features are six music channels in stereo sound and built-in backward compatibility with original Intellivision games and peripherals for the Inty II like the Intellivoice and computer add-on (see below). Oh, and a real 16-bit CPU is also to be included in the mix. A launch title library of six to eight games is expected, including the Hanna-Barbera tie-in game Yogi Bear’s Adventures, along with other titles like Treasure of the Yucatan and Grid Shock. Air jockeys should revel in the planned Air Ace, an air combat game allowing the player to soar over a full landscape in three-quarter perspective. The system is previewed in a private room during the CES show, to a select group of individuals.

The plan is to have the Intellivision III hold the line until a top-secret project code-named Decade can come to fruition sometime in 1984, intended to develop the Intellivision IV as the next generation of video games. By the fall of 1983, however, Mattel has scrapped the Intellivision III. The company reports that this is because of an advanced graphics handling technique developed by Ray Kaestner for the aborted system. When applied in games for the current Intellivision systems,  Super-Graphics, aka Mattel Electronics Graphic Development System GDS-7809, displays the same high-resolution as the Intellivision III. One such game is Masters of the Universe: The Power of He-Man, part of which Kaestner designs.