Customers do not want online games.

Even though they pioneered home videogame consoles with the original Odyssey, Magnavox, a subsidiary of Dutch high-tech conglomerate Philips as of 1974, has to play some serious catch-up after the advent of programmable systems like the Channel F and VCS. Their answer is a redesign of a machine originally prototyped by the company in 1977, featuring 24 built-in games. Called the Odyssey² (O²), the system is re-tooled as a programmable machine and debuts for a suggested retail price of $199.95 in 1978. Seven game carts are available at launch, selling for $19.95. Also available is Computer Intro, which teaches users the basics of assembler and machine language programming for the low, low price of $24.95. 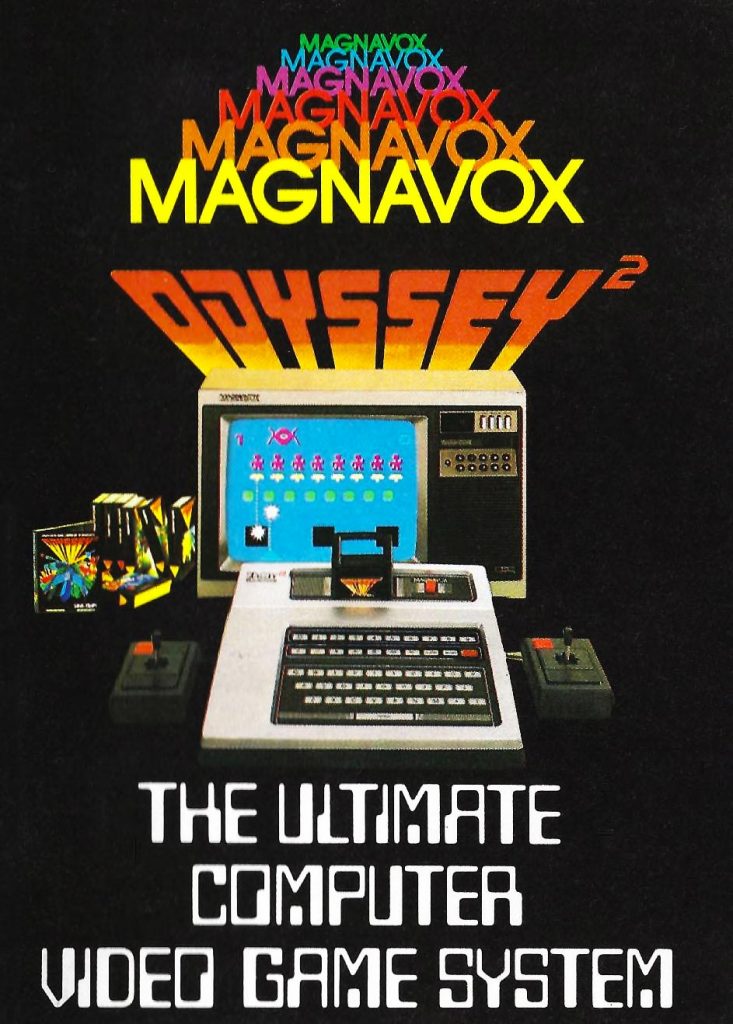 Inside the O² is an Intel 4-bit 8048 CPU, running at 1.78 MHz. It is touted as The Ultimate Video Game System, mainly on the strength of its innovative, but ultimately under-utilized, 49 key alphanumeric membrane keyboard. Making things annoying for anyone who might want to use the flat keyboard for programing, it also flies in the face of a regular keyboard layout by not having the Return/Enter key in the normal place, but in a row above the alphabetic keys right next to the reset button.  Still, the selling point of the keyboard forces Atari to release membrane keypad add-ons for their VCS for use with mathematical games and such. The O² falls short in other, more important categories; it has lower resolution graphics than the Atari VCS and only one audio channel, compared to its rival’s two. Another problem are the joysticks hardwired right into the machine, so that when the sticks wear out or break (which they often did), there is no choice but to take the whole contraption back to the dealer. This is later fixed in a remodelled O² with external joystick ports. The marketing strategy for the unit also leaves something to be desired. Unable or unwilling to heed lessons learned from the sales problems of their first Odyssey, distribution of the O² is again initially limited to authorized Magnavox dealers, severely limiting its sales potential.  The system has fairly better luck in Europe, where Philips markets it as the Videopac G7000. In fact, two other Videopac models are produced for the European market, the G7200 featuring a built-in monitor, and the G7400 which is the equivalent of the mysterious Odyssey³ (see below).

A colourful congrats! greets buyers of the O2 in the console manual, 1980 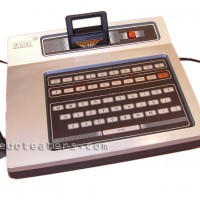 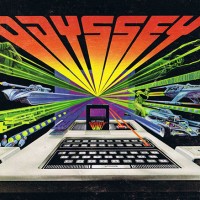 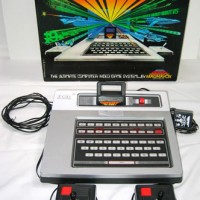 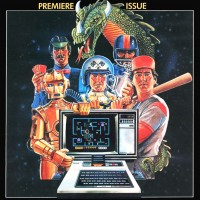 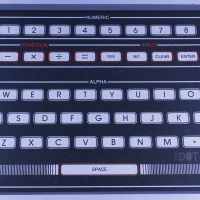 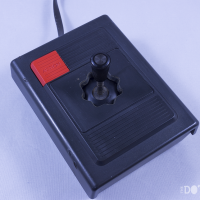 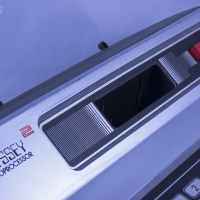 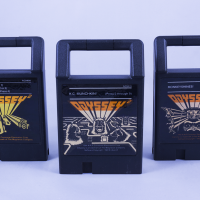 Game cartridges for the O2 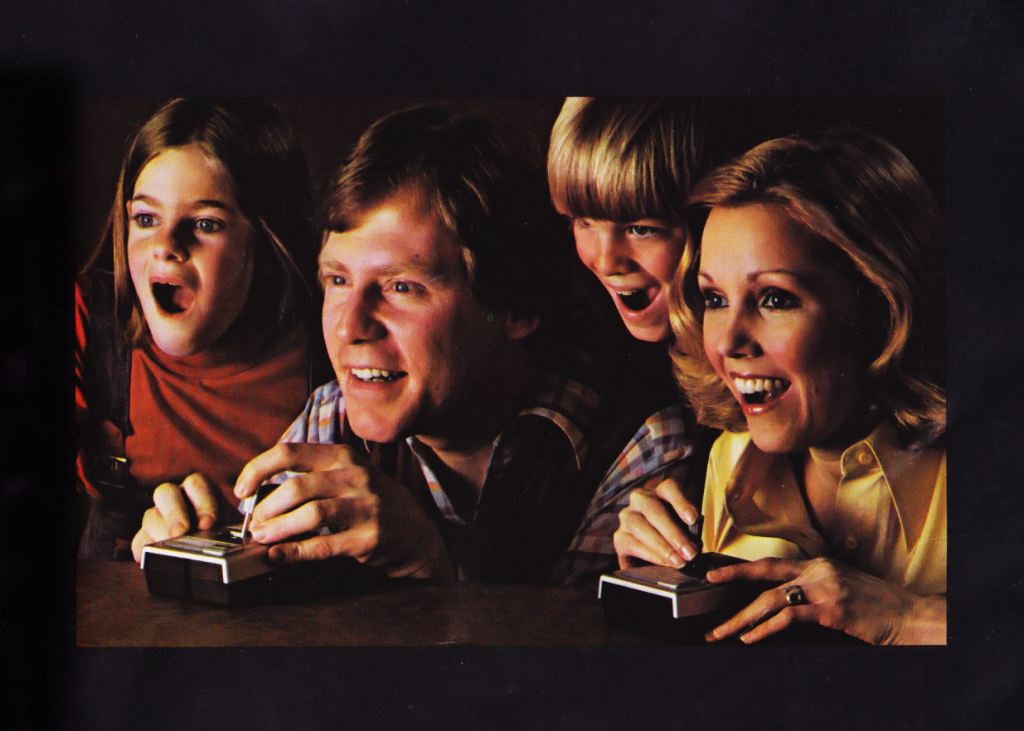 Magnavox hardware engineer Sam Overton creates most of the initial game titles for the O², including passes at most of the staple sports games like football, basketball and golf. However, North American Philips (NAP) decides that video games aren’t such a great way to sell television sets, and six months after the launch of the Odyssey² pulls the plug on the Game Group in an overture to pulling the machine off the market completely. Ed Averett is an electrical engineer and sales representative at Intel, supplier of chips for the Odyssey². When he hears that the system might be cancelled, he convinces his employer that keeping the O² afloat will also keep open an avenue to sell Intel chips. Thus, Averett starts making games for the console from his home in Chattanooga, Tennessee as a freelance developer, along with his wife Linda, also an electrical engineer. They create about half of the 50 games eventually produced by Magnavox, receiving a royalty for each cartridge sold in lieu of a salary. The Averetts face some extremely limiting technical confines developing for the O², such as a measly 2K of ROM available in each cartridge. The “Challenger Series” line of games bumps this up with 4K carts, but they still fill up fast.  With Ed designing the games while his wife programs, they crank out each game in about three months, amounting to some of the most creative home video games of the era. One of the Averetts’ creations becomes the crux on which the O² rises, only to eventually drop into oblivion. 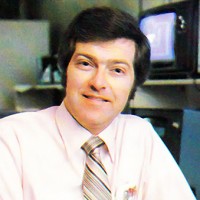 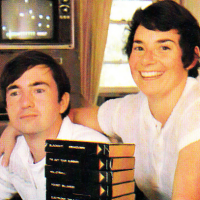 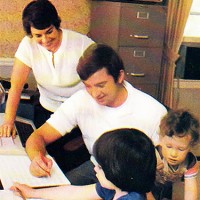 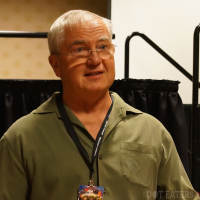 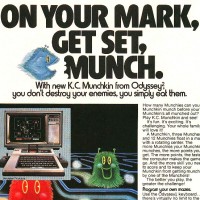 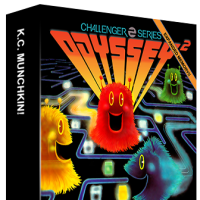 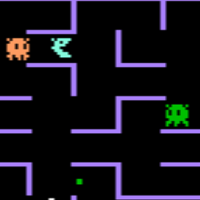 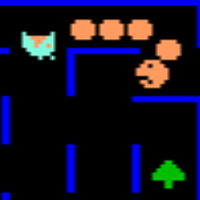 K.C. gets some tail in K.C.s Krazy Chase

K.C. Munchkin! is created to capitalize on the immense success of arcade wunderkind Pac-Man, with the title of the game being a clever take on the name of NAP’s head of the Consumer Electronics Division, Kenneth Charles Meinken, Jr.. As Ed Averett is completing the game, Mike Staup, head of home game development at NAP, investigates the possibility of obtaining a home video game licence of Pac-Man for the O². Finding the rights unavailable, NAP feels that the gameplay is safely different from Pac-Man to avoid a lawsuit against its own game, although it does tell Averett to change some aspects to further distance the game from the arcade hit, such as changing the colour of the main character from yellow to blue. The company also forbids any reference to Pac-Man in marketing materials. NAP releases K.C. Munchkin! in 1981, and it rapidly becomes the O²‘s killer game, causing people to buy the system just to play it. And play the game they do: in its first two months on the market, K.C. Munchkin! outdoes the sales figures of every other O² game combined, including some that have been on the market two years. The popular game features such enhancements to the Pac-Man formula as pellets that move around the maze, and a rotating monster cage…. as well as the ability for users to build their own mazes. 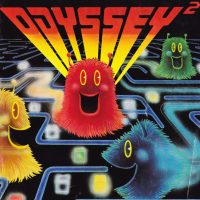 How many munchies? Cover of instructions for K.C. Munchkin, 1981 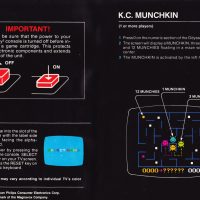 Know your munchies from your munchers: Page 2-3 of the K.C. Munchkin instructions, 1981 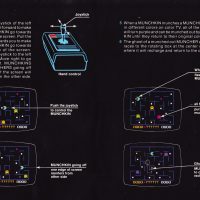 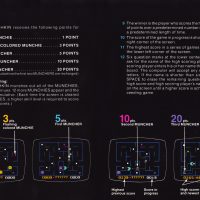 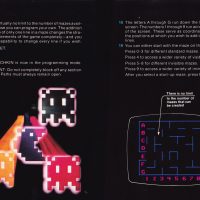 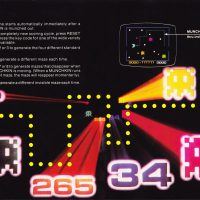 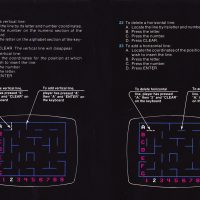 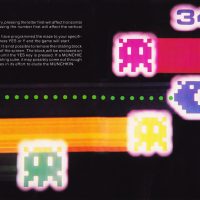 Midway, owning the Pac-Man arcade rights, and Atari, owning the home video game rights and releasing its inferior version that same year, are not amused. The resulting flurry of litigation is enough to have people following the case snapping their necks back and forth as if watching a particularly intense rally in PONG. In November of 1981 Atari and Midway sue Magnavox and NAP over copyright infringement and unfair competition via the Illinois Uniform Deceptive Trade Practices Act, seeking an injunction to prevent the sale of K.C. Munchkin over the crucial Christmas season. While not successful at that time, a judge eventually agrees that the graphic elements of Munchkin are close enough to infringe on Atari’s licence, and sales of Averett’s game are halted. NAP then appeals to a Chicago district court, where Judge George N. Leighton rules that the different facial features separate the games enough, along with K.C.‘s moving maze as opposed to the static landscape of Pac-Man. He allows a temporary stay on the previous decision, and sales of Munchkin resume. Finally, this stay is challenged by Atari and Midway and overturned in 1982 in a Chicago federal appeals court which focuses on the visual similarities between the two games. Such aspects as both characters having a wedge for a mouth, similar sounds that play as they gobble the dots in the maze, and how both disappear when eaten themselves are focused on, as opposed to the overall gameplay. The court rules that while the games are not entirely identical,  “K.C. Munchkin captures the ‘total concept and feel’ of and is substantially similar to PAC-MAN.” It also doesn’t help that the Plaintiffs produce plenty of examples of retailer newspaper ads and store sales staff referring to K.C. Munchkin as “like Pac-Man” and “Odyssey’s Pac-Man“. Of course, NAP has no control over this type of independent promotion, and had specifically forbid such claims in advertisements for their game, but it still goes a way to show damage for the plaintiffs. NAP attempts to take the matter up with the U.S. Supreme Court, who refuse to hear the case. With an injunction in place, NAP can sell remaining stock in stores, but must notify dealers that no further orders can be made for their best-selling game, and the O² never really recovers from the loss. As for which version is better, it’s certainly debatable. On a basic level, for a game dedicated to eating things, Pac-Man has an entire maze full of dots to munch on, so it’s arguably more satisfying. Then again, K.C.‘s quarry personifies “fast food”. 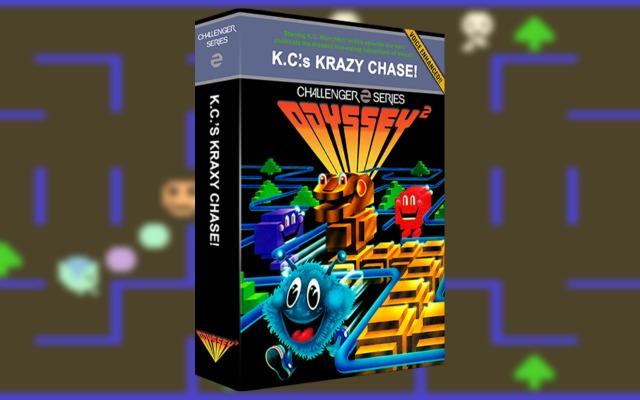 Averett strikes back in October 1982 with the utterly amazing K.C.’s Krazy Chase!, with our intrepid K.C. rolling through a forested maze trying to eat the tail of a creature called a “Dratapillar”…a thinly disguised poke at Atari. Smaller legged creatures called “Drats” also chase the titular character around. While being a debut action game for The Voice speech attachment (see below), and easily one of the most graphically complex and enjoyable games of the pre-1980 home videogames, K.C. Munchkin! comes too late to save the O².