Trying to sell your product by first changing society is a tough proposition.

Glancing over our shoulders to the games that were, we see Raid Over Moscow, released in 1984 by Access Software for the Commodore 64. It was released for most of the other major computer systems of the day the next year.

RoM was done by Bruce Carver, for the company he founded in 1982. This game and the terrific Beach-Head released in 1983 would be enough to put Access into the history books. However, Carver and his brother Roger also did the seminal golf game Leaderboard for the C64, likely the first true golf simulation most people had ever played. Not resting on their laurels, the Brothers Carver would take what they learned from Leaderboard and produce the wildly popular Links series of golf simulations for DOS computers, the first game appearing in 1990. When Access was purchased by Microsoft in 1999, the Links series absorbed Microsoft’s Golf games, continuing as further Links games up to 2003. 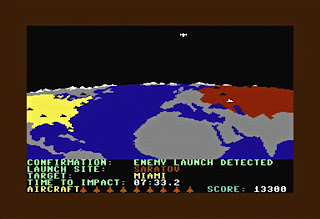 RoM puts the player in the shoes of squadron commander of a U.S. space station, on shift just as those godless commies decide to start WWIII. Once a launch as been detected, the clock starts ticking towards nuclear annihilation. You must get your pilots into their futuristic fighter aircraft, out of the hanger of the space station, and down to Earth where they match up against the defences of the city that has launched missiles towards North America. 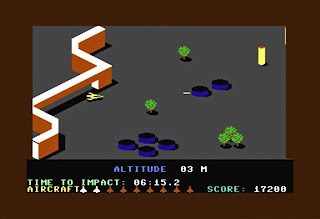 Once on the ground, you enter a kind of Zaxxony mode where you fly through city defences in a psuedo-3D view. Dodging tanks, helicopters and trailing anti-aircraft missiles, you try and deal as much damage to the city before taking on the Soviet control silos. 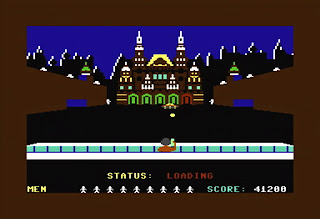 With the control silo taken out, you rinse and repeat until you get down to just Moscow. One last run through the city, and you come to the Soviet Defense Center. With your bazooka, you must open the door to the reactor while comrades snipe from the walls and a strange UFO-looking tank tracks your every move. Once you open the white door to the reactor and have cleared out the enemy soldiers, it’s in to the reactor base and a duel with the robot maintenance crew. If you dispatch them with enough time to spare, you escape to fame and glory. If you fail to leave enough time to make it back to your ship, your family will be notified of your heroism.

RoM is one of the more compelling games in the C64 library, even though it is a mish-mash of other games such as the aforementioned Zaxxon, and it is sometimes not obvious what you have to do to continue the mission. The graphics are nice and clean, however, and pretty advanced for a C64 game.

Although I often wonder why the U.S. bothers with fighter jets when they obviously have a team of giants that tower over these fighter jets to do their bidding. They actually have to shrink these big guys before they fit in the jets. Where is the efficiency in that? Just strap rockets to the back of those bad boys and let them at it. And another question to leave you with… why are they wearing tap shoes?