Videogames are not for us. They’re here to entertain the television.

Nobody beat the Atari 2600 for third-party game support, but Mattel’s Intellivision console wasn’t a slouch in that department, either. While one could argue that the shovelware foisted onto Atari’s flagship system was one of the culprits of the Great Videogame Crash of 1983, third-party support was also crucial for a console’s future on the market, as well. And maybe the greatest external game developer for the Inty was Imagic, who not only made games for the system, but good games, many of which utilized the advanced power inside the system to bring gamers to places no one had ever imagined possible. I made this video to showcase why Imagic was #1 with Intellivision owners in the later stage of the console:

The Supercharger was one of those devices released later in the lifecycle of the 2600, designed to extend the life of the console which, by 1982, was incredibly popular but outclassed by the newer game systems. Made by Starpath (formerly Arcadia before having to change their name to avoid confusion with Emerson’s Arcadia 2001 console), the Supercharger was an elongated cartridge that added another 6K of RAM to Atari’s old warhorse. Not only that, but it also had a cable that you would plug into the 1/4″ jack of any cassette tape recorder, and load in games for the system via cassette. Thusly, not only did you get more RAM for your 2600 but also bigger games.

One such game being the delightfully titled Communist Mutants from Space. It is yet another Galaxian knock-off, albeit with some twists from the formula like different types of missiles you could fire at the Commies swooping down at you, or shields to defect their godless shots, or a time-warp feature to either rewind a fatal mistake, like letting government take control of all means of production from god-fearing capitalists.

It had a cool cover, too. 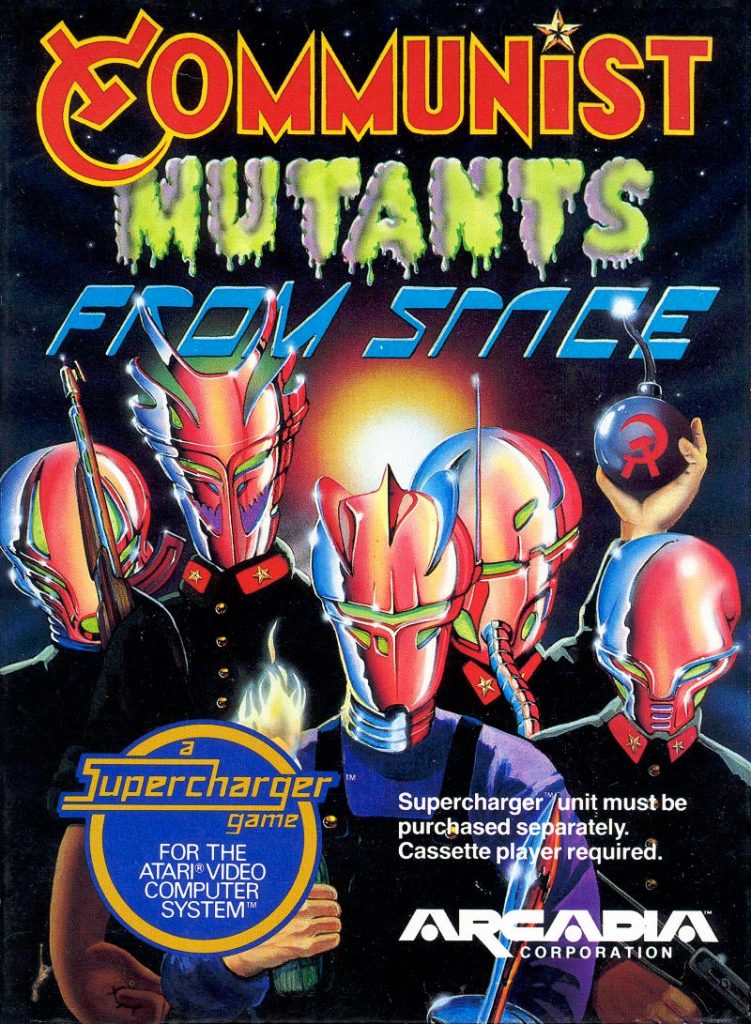 Not just commies, but mutant commies. From space!

But there’s something familiar about those commies, even if they are mutants and from space. Something about their shininess,  about how their design is both round AND sharp at the same time… let’s journey down to the next paragraph for the answer, shall we?

It’s because the cover to the game was drawn by Alton Kelley, who, along with Stanley Mouse, made the super-cool rock album covers for Journey, one of the biggest rock bands of the 70’s and 80’s. Kelley was particularly responsible for the famous Scarab escape vehicle feature on the cover of, you guessed it, Journey’s Escape album. Maybe you’ll see some Communistic similarities in it. 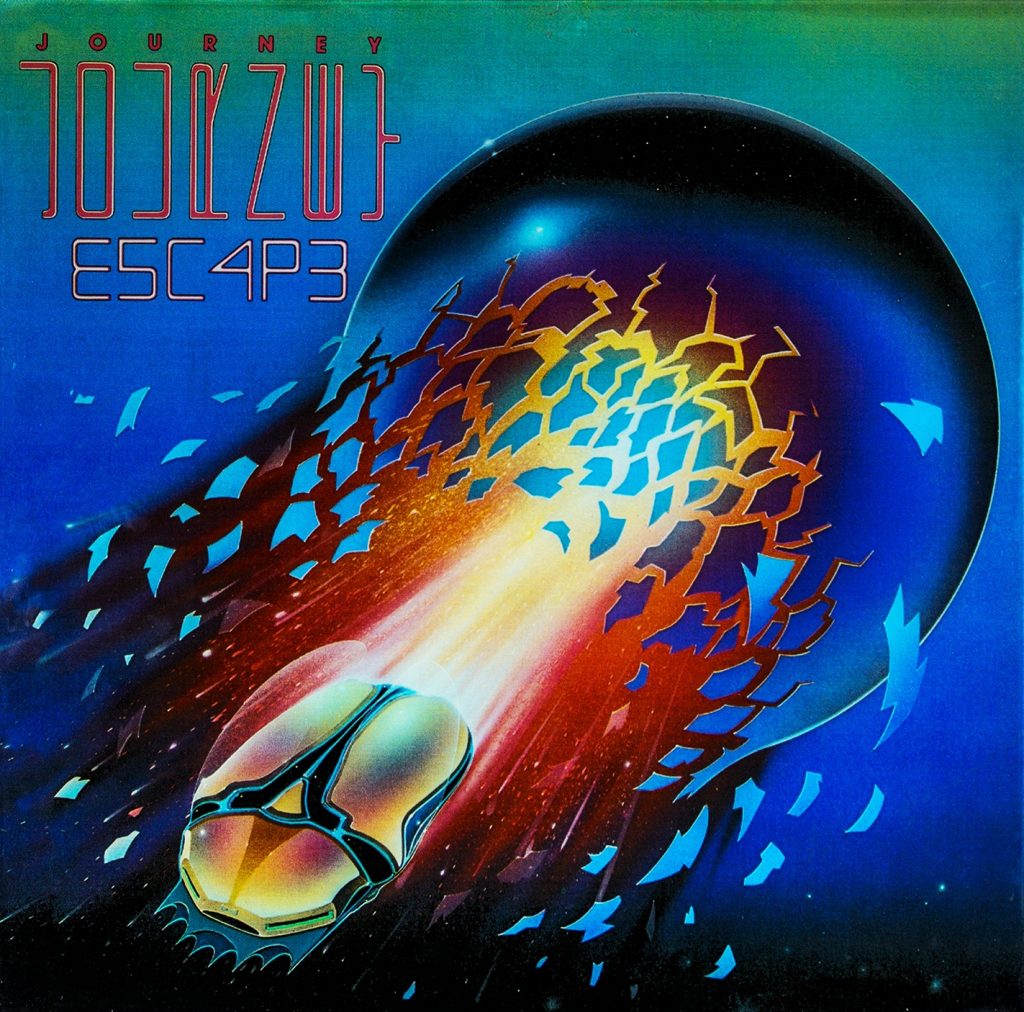 A closer look at that Scarab vehicle: 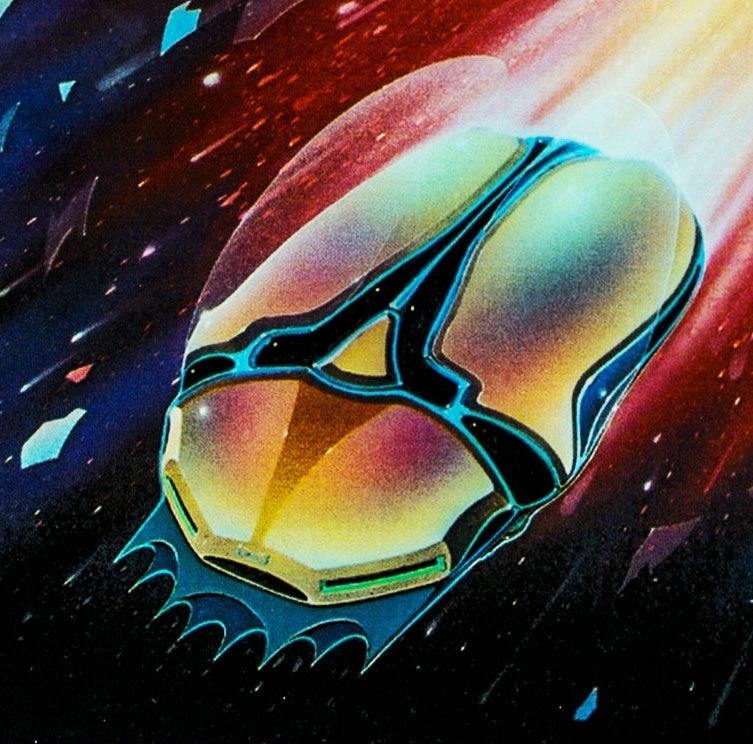 Pretty nifty. Of course, Communist Mutants From Space isn’t the only video game connection to Journey. The band had two games of their own. Data East made Journey Escape for the 2600, and Bally/Midway made an arcade version called simply, Journey.

For more fascinating information about the Supercharger add-on for the 2600, journey over to this article here at The Dot Eaters.

For more info on the Data Age Journey game, smash your way out of the egg and zoom over to this article.