It was 35 years ago today that Nintendo of America first let loose the angry ape Donkey Kong on the American public, but the company history goes back far earlier than that. Founded in 1889 in the historic Japanese city of Kyoto, Nintendo Koppai started off making hanafuda cards, then moved to American style cards at the turn of the century. In the 1960’s, third Nintendo president Hiroshi Yamauchi and former maintenance man Gunpei Yokoi would steer the company into toys and electronics. Yamauchi eventually set up an American games division selling Nintendo arcade games, putting his son-in-law Minoru Arakawa in charge. 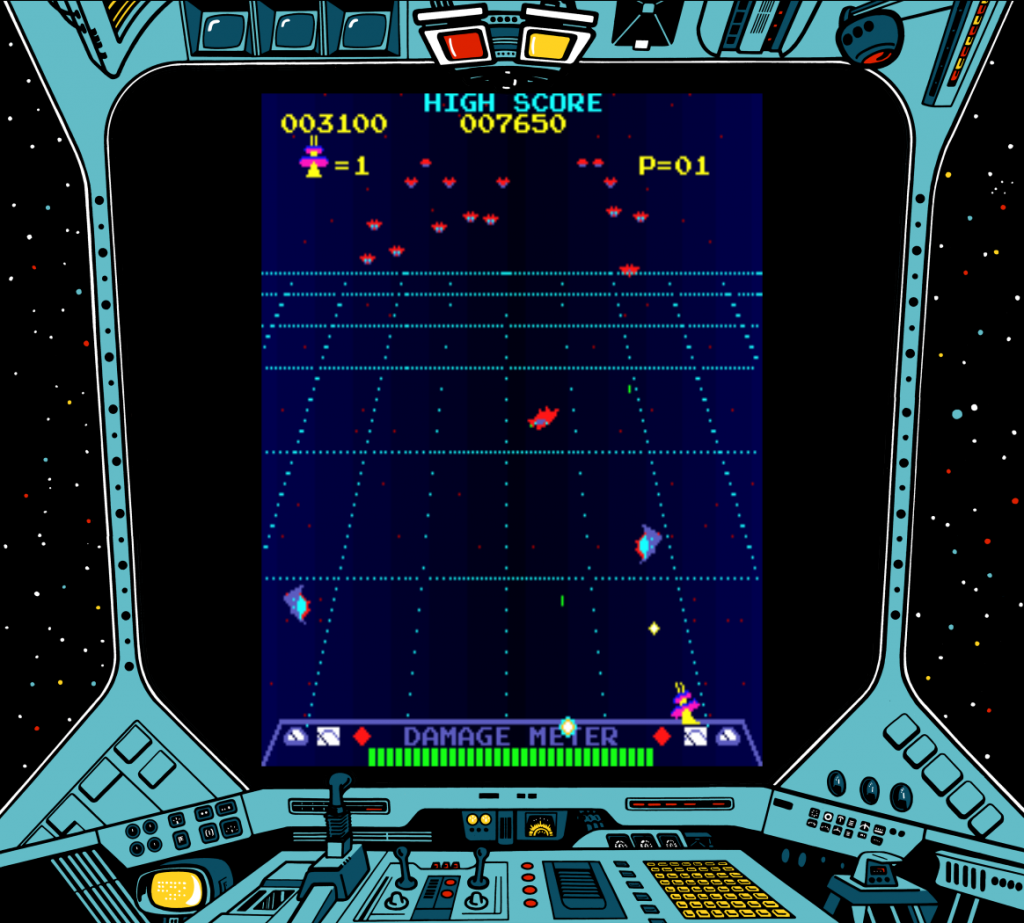 Nintendo of America struggled to move arcade product such as Sheriff and Space Fever. Radarscope was a particular turkey, struggling to move out of the NoA warehouse as the Galaxian fad faded in U.S. arcades. In order to use up surplus Radarscope circuit boards, Yamauchi directed artist Shigeru Miyamoto and the veteran Yokoi to create a new game based on the hardware. What they came up with would help revolutionalize the game industry and put Nintendo on the road to riches. 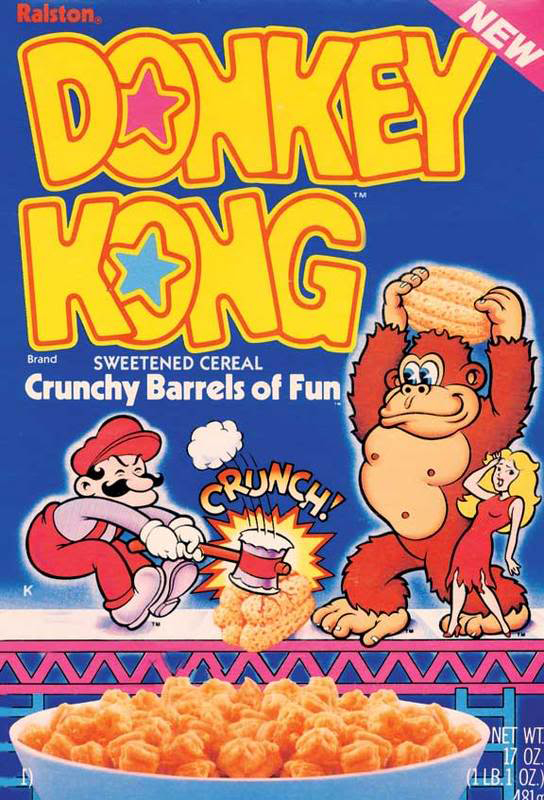 So happy birthday to Donkey Kong, Mario, and Pauline. Without you, the video game industry just wouldn’t be the same.

The history of Nintendo and the development of Donkey Kong

The history of Nintendo Power magazine

The passing of Hiroshi Yamauchi

A review of the movie The Wizard

I had a visceral reaction watching this new trailer for Adam Sandler’s upcoming classic video game themed film Pixels, but it wasn’t in one direction or the other about the quality of the movie. It’s neat to see these vaunted video game characters come to life, but in the trailer they appear to be in service of slight sight gags and weak punchlines. It’s awesome to see Pac-Man creator Toru Iwatani make a prominent appearance, but then he’s used in a joke that merely subverts your expectations, which is one of the lowest forms of humour for me. I’m hoping that some more insightful, telling observations about video game culture and game nostalgia were left out of the preview for brevity’s sake.

Ah well, I guess we’ll have to wait and see when Pixels hits theatres this summer. It will either be the best thing ever, or the worst thing ever. For now, here is the full, official Trailer:

Posting this story on the 85th anniversary of Black Tuesday, when the New York Stock Exchange plummeted 30 points and heralded the start of the Great Depression, is rather apropos. For at the dawn of the 80’s, Nintendo’s fledgling American subsidiary was in its own tailspin, and its fate would hang on the licensing of a depression-era cartoon icon for a hit video game.

Formed in 1980 in order to distribute Nintendo arcade games in the U.S., sales of derivative product such as HeliFire and Space Firebird for Nintendo of America had flatlined. NOA boss Minoru Arakawa put all of his eggs in one basket with Radarscope, a Galaxian clone that did little to distinguish itself from the other similar shoot-em-ups that littered American arcades. Only able to sell half of the cabinets he had ordered, Arakawa contacted his father-in-law in Japan, Nintendo, Ltd. boss Hiroshi Yamauchi, with a desperate plea: send him a hit game, or give up your dream of conquering the U.S. video game market. To produce such a game, Yamauchi paired a junior employee unversed in game design, named Shigeru Miyamoto, with his most seasoned hardware engineer, Gunpei Yokoi. The pair’s original intent was to quickly adapt a 42-year-old iconic cartoon character to a video game.

The story continues in the TDE Bitstory archive, after the jump:

END_OF_DOCUMENT_TOKEN_TO_BE_REPLACED

Hiroshi Yamauchi has died. Yamauchi came to power at Nintendo in 1949 at age 22, replacing his grandfather as head of the company after the elder suffered a stroke. Even so young, Yamauchi showed the iron will he would become infamous for, insisting that other family members in the company be fired, as well as quickly purging executives who refused to take him seriously.

Nintendo’s fortunes had come from the manufacture of playing cards ever since its inception in 1889. In the later part of the 60’s, Yamauchi took steps to expand the company into toys and games, creating an R&D department within Nintendo to develop such products. At the head of this group Yamauchi put a maintenance man with the name of Gunpei Yokoi, an enthusiastic tinkerer with an uncanny knack at creating new products out of older technology. With success after success, Nintendo would come to dominate the toy market in Japan. Later, as Yamauchi took notice of the new technology coming out of the States in the mid-70’s, they would do the same with video games.

With an almost preternatural ability to pick both talented designers and the games and systems they produced, hardly anything made by Nintendo reached store shelves without Yamauchi’s approval. When the company’s U.S. subsidiary floundered in the early 80’s and begged for a new hit game to sell, it was Yamauchi who took the chance on a young artist unproved in game design to come up with a product. The game was named Donkey Kong, and its creator was Shigeru Miyamoto.

After issuing orders to create a cartridge-based home console called the Famicom (Family Computer) that met with great success in Japan, Yamauchi would set his sights on conquering the American market. Undaunted by the toxic landscape created by the total collapse of the U.S. video game market in 1983-84, Yamauchi insisted on selling the Famicom to American homes as the Nintendo Entertainment System (NES) in 1985. The system would single-handedly resurrect the video game industry from cindered ashes back to billions of dollars in sales, and make Nintendo a word synonymous with video games, as Atari had been before it.

After 55 years at the helm, Yamauchi was succeeded as Nintendo president in 2002 by Satoru Iwata. He remained the company’s largest individual shareholder until his death, at the age of 85.  While he may have ruled Nintendo with an iron fist, the company he drove from Japanese playing card manufacturer to globally dominating video game giant is now mourning his loss.

You can read the history of two great products with Yamauchi’s stamp on them here at The Dot Eaters:

The History of Donkey Kong

The History of the Famicom

Here is a strangely funny ad shilling Bacardi rum, with a situation that seems similar to a certain famous video game protagonist:

via N4G and Electronic Theatre

Usually I do a run-through with the game as practice and then start recording gameplay footage, but of course with the arcade version of Zaxxon it took maybe 5 plays before I could survive long enough to get useable footage because the game is so bloody hard.  The Atari and Intellivision versions are the most dramatic departures from the arcade, at least graphically.  Sure, you can understand why the limitations of these two warhorses require a scale-back from the cool isometric pseudo-3D of the original, but still…. belch.  That ain’t Zaxxon. They come off more as a sparse River Raid, without the river.

One game where the INTY comes off surprisingly best is its Bump ‘N’ Jump port.  Usually the ColecoVision runs away with these arcade translations, but here, the Intellivision definitely captures the look and tone of the original arcade better than the CV.  Heck, even the 2600 version holds its own.  Will wonders never cease?

If you’ve never seen the documentary The King of Kong: A Fistful of Quarters, you owe it to yourself to go right now and watch it.  It’s even on Netflix, go ahead, I’ll wait.

Now that you’ve seen the brilliant story of Steve Wiebe going after the high-score record on Donkey Kong, held by the legendary Billy Mitchell for nearly 25 years, you can appreciate The Kong Off, a Donkey Kong competition to be held on March 19th and 20th at Richie Knucklez’ Arcade Games in Flemington, NJ.  Knucklez’s showroom boasts over 75 various working game cabinets on display, lovingly restored and available for purchase if you think you can fit one in the old hatchback. 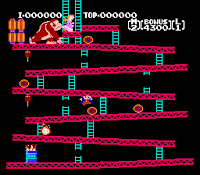 This competition is sure to attract the cream of the crop of competitive Donkey Kong players.  One dark horse is Dean Saglio, who actually boasts a score higher than the top three favoured participants.  The problem?  He holds his high score of 1,136,400 on the MAME arcade emulator, which emulates the original arcade game CPUs using ROM information pulled right off the original game chips.  While Donkey Kong on MAME is perfectly replicated using the program, there is a huge difference between sitting in a comfy chair in front of your computer, and standing in front of an actual Kong cabinet, joystick in your sweaty hands.It looks to shape up like a thrilling competition.  Gentlemen, roll your barrels.

For more information on the history of Nintendo and Donkey Kong, consult your local Dot Eaters entry.