If you’re not failing occasionally, you’re not reaching out as far as you can.

Back in the heady days of 2011 I posted about a movie version of the classic Atari coin-op Asteroids, being developed by Universal as a project for Master of Disaster Roland Emmerich.  I haven’t heard much about that project since, but I’m thinking it ought to be just scuttled right now, because THIS version looks way better:

As always, for more information on the history of Atari’s seminal arcade game Asteroids, consult your local Dot Eaters entry.

If it’s Monday, it must be another video game Retromeme: 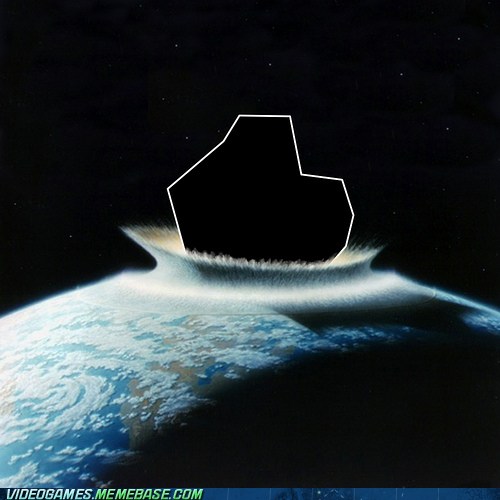 According to New York Magazine, there was a heated battle to purchase the movie rights for the seminal Atari arcade game Asteroids that helped solidify the industry back in 1979.

Universal has come out on top, and has tapped disaster movie meister Roland Emmerich (Independence Day, Godzilla, The Day After Tomorrow, 2012, ad infinitum) to direct.

Emmerich assures that only the latest 3D technology will be used to create the A-shaped spaceship, to be rendered in outline graphics and presented in a process known as Black and White.

Okay, just kidding about that part. As per usual with these things, the storyline will be bloated up, this time into a tale of the remnants of humankind living in an asteroid belt alongside an alien race, who are not as benevolent as first surmised.

Emmerich will be assisted by Transformers: Dark of the Moon producer Lorenzo di Bonaventura, and scriptwriter Matt Lopez, of Disney’s The Race to Witch Mountain. All involved are no doubt hoping rocks aren’t the only things the movie breaks when it collides with audiences in 2014.