The coin-op version of Dragon’s Lair is the perfect example of how technology will not improve games.

Microsoft and a documentary film crew have today unearthed some cartridges of Atari’s E.T. The Extra-Terrestrial game for the 2600, buried as “defective materials” by the company some 30 years ago as the video game industry was crumbling like so much cheap cement.

The only thing “defective” about E.T. was its inscrutable and endlessly frustrating gameplay.  Atari mother corporation Warner Communications paid Steven Spielberg 21 million dollars for the home console and arcade game rights to the movie, and programmer Howard Scott Warshaw hammered out the game in a breakneck six week deadline to get it out in stores for Christmas 1982.   Warshaw was present today among spectators viewing the excavation of his most infamous creation. 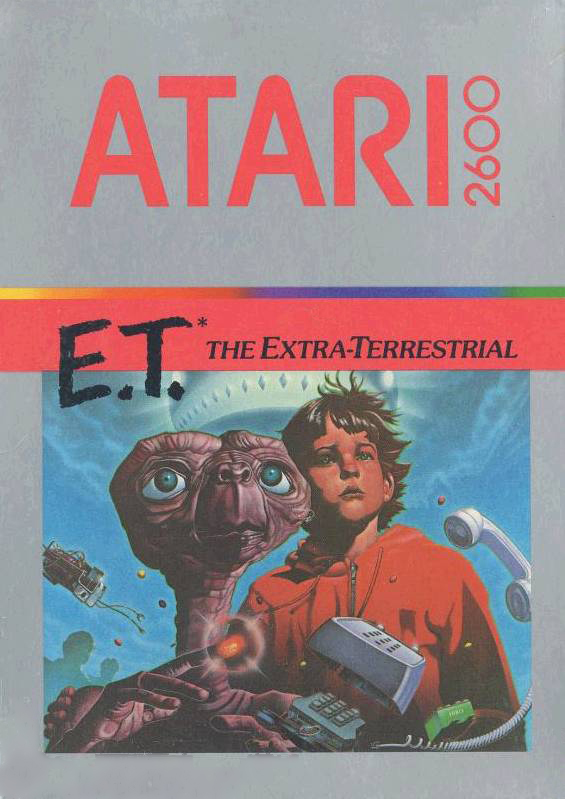 A run of five million cartridges were released to stores: only one million eventually sold, becoming a well-publicised flop that tarnished Atari’s reputation with retail game buyers and furnished another nail in the company’s coffin. Along with surplus cartridges for other games, as well as various hardware prototypes, a convoy of tractor-trailer trucks shipped the unsold copies of E.T. to the landfill in Alamogordo, New Mexico where they were literally swept under the rug.

E.T. wasn’t solely responsible for the video game market cratering in 1983 – 1984, as a lack of technical innovation and the booming home computer market also took their toll. But it remains a touchstone of the hubris and failure that helped bury the greatest video game company in the world, and with it an entire industry.

Tonight’s the big night!  Overly primped celebrities engage in vapid self-congratulatory masturbation.  Still… we’re excited! Wrapping up this series of articles covering games based on movies either nominated for or winners of Best Picture, we have perhaps the most infamous: Atari’s adaptation of Steven Spielberg’s E.T. the Extra-Terrestrial. Released in 1982, the movie concerned itself about the story of a young boy who befriends a lost space alien and attempts to return him home.  It was an immediate hit, and through various re-releases the movie ended up taking around $435 million over its box-office lifetime. It was nominated for an Academy Award in 1983, but lost to Richard Attenborough’s epic biopic Gandhi.

Atari saw E.T. as a natural video game hit. Steve Ross, head of Atari owners Warner Communications, negotiated a 21 million dollar deal for the home video game rights to the movie. The problem was that negotiations took so long that Atari game designer Howard Scott Warshaw was left with only six weeks to get a game for the VCS/2600 out the door in time for Christmas 1982. Within that crushing deadline he attempted to create an involved adventure game featuring the lovable little alien, but the result is confusing and endlessly frustrating.  Players strive to guide E.T. around an abstract landscape, searching for the three pieces of the interplanetary telephone that he can use to phone home. With only a certain amount of energy to complete this task, E.T. is chased by government agents and scientists, who will delay his progress. Also on hand is young Elliott to lend assistance during the mission.

The game is at least interesting, with invisible power zones positioned around the different screens giving E.T. special powers, such as teleportation and the ability to scatter his pursuers. The real problems are the holes that are scattered about, into which the alien falls over and over and over and over and over again. My gosh, the holes. Friedrich Nietzsche once wrote “When you gaze long into an abyss the abyss also gazes into you.” Atari’s E.T. cartridge has so many, many eyes to gaze so very, very long into you.

For more information on the E.T. game and its role in the great video game crash of ’83 – ’84, consult your local Dot Eaters entry.

These days, mountainous-haired carrot-top Conan O’Brien seems to be taking a lead from Jimmy Fallon, who replaced O’Brien on NBC’s Late Night back in 2009. Conan went on to host the vaunted late night talk show The Tonight Show, a run that only lasted months. Fallon himself has since been tasked to take over The Tonight Show when current host Jay Leno steps down, perhaps even permanently this time.

Anyway, this post isn’t meant to dwell on the revolving-door morass that is late night television in America.  It is meant to point out that O’Brien himself has started to mine video games for comedic value, much like Fallon has pretty much from day one.  Fallon played Wii games on his show when Nintendo’s revolutionary console came out, and has featured other popular games in front of the camera.

This focus on video game playing by late night hosts seems on the whole to be tapping the popularity of “Let’s Play” videos of game play that litter YouTube and twitch.tv these days. Germain to this site, O’Brien featured a “Throwback Edition” of his Clueless Gamer segment last week, playing games from the Atari 2600 library. Among the savaged product was the big kahuna of awful classic games, the impenetrable E.T. The Extra-Terrestrial, a game so dense and confusing, and with such high-hopes pinned upon it at release in 1982, that its abject failure was one of the reasons the entire video game industry cratered in 1983-84.

Gaze upon the spectacle of Conan O’Brien sampling the best (and worst) games from one of the most popular video game systems of all time: