I’ve always felt I wanted to be an architect of the future. 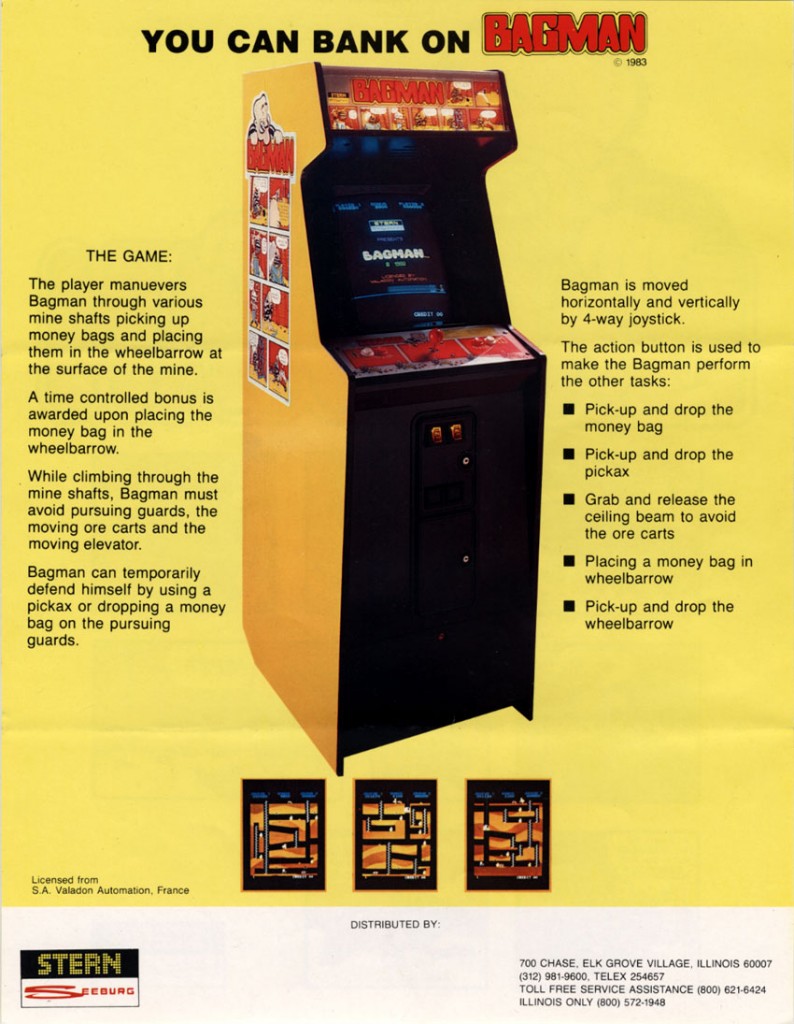 Bagman was a different kettle of fish back in 1982.  It’s a platform game, but with lots to do besides climbing up and down ladders, although there’s a lot of that, too. It also was an early game to feature multiple screens, and certainly one of the first with multiple contiguous screens. The game was done by Valadon Automation, a French company with a few other titles to its credit, although nothing approaching the same popularity as Bagman. The game was quickly licensed by Stern Electronics that year, who followed it up two years later with Super Bagman, adhering to the same theme but with some refinements in gameplay.   As for Stern, you can check out our article on their most famous creation here.

The Bagman marquee spells it out.

The game places you in the striped pajamas of an escaped convict, returning to the mines where he has hidden his ill-gotten bags of gold.  The plot is thin enough that the entire story can be relayed in a comic strip displayed on the game’s front cabinet marquee: Bagman must pick up and take the gold bags to the top of the mine and place them in a wheelbarrow that he can move left and right across the three screens that make up the mine.  To facilitate this, he can grab hand-holds above the mine cart track and pull himself up to avoid it, and drop himself down into it as it passes below him. For defense from the guards who are chasing him through the passages, he can either drop sacks down on top of them from ladders, or use a trusty pick-axe he can find in the maze. If he can collect all the bags lying around, he’s scott-free… at least until the whole thing starts again at a harder difficulty.

While the game is fun, it is also extremely difficult.  There are only a few paths to take to get away from the ever-patrolling guards, and there are plenty of ways Bagman can end up dead on his back; falling down a shaft, getting flattened by the mine cart, or perhaps just plain running out of time.  The bonus clock will reset every time the player puts a bag of gold in the wheelbarrow, but getting to the bottom of the mine and back up, while avoiding all the traps and the guards, before becomes a daunting task.  In this game, you don’t only lose your bonus when it ticks down to zero, you also lose a life. Knocking the guards out only incapacitates them for a very brief few seconds, so rushing to put some distance between you and them before they awake makes for some thrilling moments in the game. A nice touch is that you can drop a sack of gold on an incline, and it will slide for a distance, knocking any guard who it touched out cold. There is also a buried blue bag of gold the player can go for, although he has to use a pick-axe to dig his way through.  This bag will award him more points if he plants it in the wheelbarrow, but it is also heavier than the others and slows Bagman down to a crawl.

The graphics are serviceable and clever, but what might linger most in people’s minds is the sound in Bagman.  Aside from the strains of Turkey in the Straw that repeat over and over again, burning into your brain as you play, the main character is also given a voice, of a sort.  His comments are produced by a Texas Instruments TMS5110A, a version of the TI LPC speech synthesizer chip that also appeared in TI’s ubiquitous Speak and Spell educational toy line. They also seem purposefully nonsensical, such as the “Ohwaa” Bagman exclaims as he places a money bag in the wheelbarrow,  or his breathless “Ohhhhwe!” as he hoists himself up via rafter.  Not to forget the defeated “Ay yi yi” he utters when he’s caught or otherwise dispatched. This really serves to bring the protagonist to life.  Or death, as it were.

Bagman is a solid package, with a lot of charming quirks and being a lot more involved than most platformers of the day.  The real issue affecting its popularity is that it was inexplicably never ported to a home console.  It deserves to be hauled out of the mines of obscurity to bask in the bright light of gaming nostalgia.

It’s not an overstatement to describe Aztec as graphically dazzling, an action-adventure game released originally for the Apple II  and Atari 8-bit computers in 1982, and then a couple of years later for the C64. Aztec is all the more remarkable when you consider that most adventure games of the era were limited to mere text to create the atmosphere.

It was designed by Paul Stephenson and distributed by Datamost, a company that produced a few other classic gaming gems, such as Mr. Robot and His Robot Factory in 1983.  Stephenson himself also designed Swashbuckler for the company, released the same year as Aztec.

A colourful (if one had a colour monitor or TV set attached to their Apple) opening title screen greets you while the game loads.  A couple of screens of white text used to set up the story fool gamers into thinking that perhaps the graphics were a big come-on and that Aztec might be just another text adventure. The text explains that apparently the famed (but unstable)  Professor Von Forster found a lost Aztec temple, but disappeared without further contact.

The player is then presented with a few options, such as choosing either to start a new game or load up a previously saved one.  A difficulty setting is then requested, ranging from 1 if you want to take things easy, all the way up to 8 if one is feeling suicidal.  Charging you with following in the Prof’s footsteps, Aztec then puts the gamer in the scuffed shoes of a fearless adventurer, cutting through all that “red line representing travelling by the air from country to country” rigamarole by opening the gameplay with you standing right outside the Aztec tomb of real-life Mesoamerican deity Quetzalcoatl. With the tap of a key, you descend into the mysterious depths.

The game is essentially a platformer, with large sprites for the adventurer and the various creatures he must dispatch or avoid.  It’s quite a menagerie down there, with spiders, snakes, alligators, Aztec warriors and even dinosaurs calling Quetzalcoal’s tomb home.  While the animations are pretty limited, it’s the details of the artwork that really makes things pop.

The layout of the tomb is randomized each time you play, and most of your time is spent searching for, opening and looking through boxes and piles of trash on the ground, which can contain weapons, health potions or just the scattered remains of poor Prof. Von Forster.  As you delve deeper the creatures get more dangerous, and the traps more cunning.  The end goal is to snatch a valuable jade idol that is hidden somewhere in the tomb, and then get out with your life.

Helping the creatures in their fight to finish you off is the game’s clunky control method.  Each action is assigned a specific key, so to walk you press “W” and then a direction key, and you’ll keep walking until you hit “S” for stop.  You can also crouch, crawl, plant dynamite, jump, run, climb… it gets to be a bit much fumbling around for each key on the keyboard, although once you get the hang on it you can navigate the tomb quickly while playing the keyboard like a virtuoso pianist. You also can enter a fight mode, where you wield either the machete or a pistol, but often it is unsure why you hit or miss something. The sound isn’t any great shakes either; just the bloops and bleeps from the Apple‘s internal speaker, but this somehow adds to the game’s spartan charms. And being able to blow your way out of a jam with a well placed stick of TNT is a play mechanic that is still fairly unmatched in adventure gaming, decades later.

I have a particularly fond memory of Aztec, because when I was going to high school the first computers we got were two Apple II‘s for the science class.  For some reason there was a copy of the game in the library of disks, so every chance I got I put that bad boy into the floppy drive and loaded it up.  After a few times of him catching me and telling me to stop playing games with the computers, the science teacher banned me from the keyboard for a week.  I learned my lesson well; when I regained computer privileges I was more careful he wasn’t around when I played.

Sure, it’s no Uncharted, but at the time, this was as close to living out the Indiana Jones dream as you could get on a computer, with Raiders of the Lost Ark having been released just the year before. Aztec, complete with all its bugs and quirks, makes for an unforgettable Apple II gaming treasure.