The 30th anniversary of the Famicom is nigh! TDE is celebrating with Updates posts concerning various aspects of Nintendo’s hugely important and influential game console. We’ll also cover details of the NES, the North American version of the Famicom, released two years later in 1985. These posts will lead up to the full Famicom and NES Bitstory articles that will be published here in mid July.  As had happened before with the Atari VCS, a console that helped create the video game market in the first place, the NES becomes a cottage industry for peripherals and other products associated with the console.  Today, we’re looking at an integral part of the immense and long-lived success of the NES.  Today, we’re playing with Power!

END_OF_DOCUMENT_TOKEN_TO_BE_REPLACED 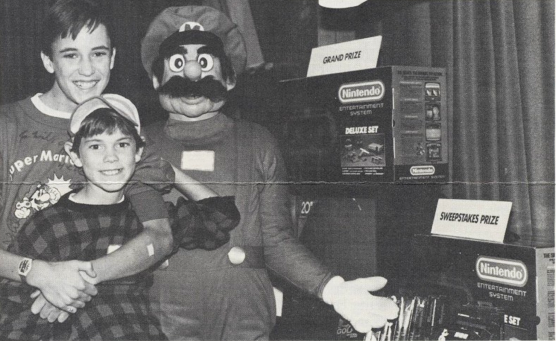 This picture comes from the first issue of Nintendo Fun Club News, a newsletter sent out to NES owners that was the precursor to Nintendo Power magazine.  Here we see a 14 year-old Wil Wheaton and his younger brother Jeremy, winners of the first ever Super Mario-A-Thon in 1987.  I think it’s terrific that celebrities pitched in to raise money to keep kids off drugs, and I’m impressed that Wheaton scored 239,400 in 10 minutes in Super Mario Bros..  Especially with that demonically possessed Mario looking on.  He stares into my soul and whispers “Mama mia, it’s game over for you, pisan”.  That’s the look you get after washing the guts of the 10,000th Goomba you’ve squished the life out of from the sole of your work boot. Yes, it’s-a me. Your worst-a friggin nightmare.