Videogames are not for us. They’re here to entertain the television.

Isaac Asimov.  He was one of the most influential writers of our time, having written the Foundation series, along with many other SF and non-fiction works, a list of which would be too exhaustive to repeat here. And not only was he a great writer, he could rock the mutton chops and also knew a good deal when he saw one: 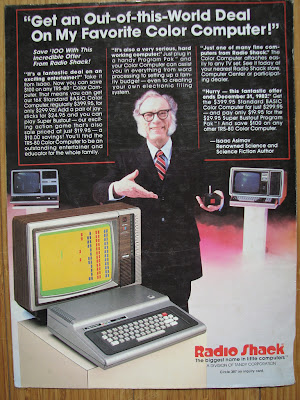 Some practical advice from Isaac Asimov, 1982

Even as Tandy computer spokesperson, I have a feeling Mr. Asimov didn’t say all those things. Perhaps not a single one of them. It must be a weird thing for an ad copywriter to put words into the mouth of Isaac Asimov, but they give it the old college try in this campaign. “An exciting entertainer”?  “Just one of many fine computers from Radio Shack”? “During the day I might write about starships. At night, I blast ’em on my Color Computer”?!!! I also like the images of him holding the joystick like someone just plopped it into his hand,  a rictus grin forming on his face with the thought “What the f**k is this thing?”.

But still, you have to take it from Isaac. What a value!

source of first ad: knmoor, via his flickr stream

(This article was originally posted to The Dot Eaters on Feb. 2, 2013)