I won’t make games with senseless violence. There has to be a reason for it, such as war.

Out of the ashes of Computer Space, an unpopular first attempt at an arcade video game which was  released by Nutting Associates in 1971, 27-year-old Nolan Bushnell, along with partner Ted Dabney, incorporated Atari, Inc. today in 1972.  Their next attempt, the first game released by the new company, would be a slightly bigger success: PONG.

Bushnell and Dabney had created Computer Space under the auspices of an informal company they dubbed Syzygy, pronounced siz-eh-jee, a term meaning the Earth, Moon and Sun in perfect alignment.  Thankfully a candle-making commune had already registered that name, so Bushnell took a term from the Japanese game Go he liked to play, and Atari was born. 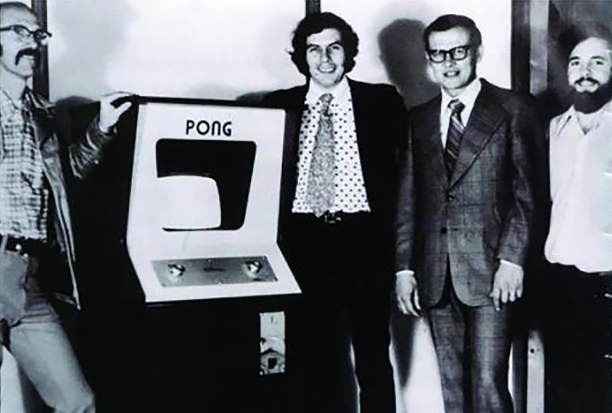 PONG was an instant success, a quicky paddle-ball video game hammered out by Atari employee Al Alcorn, the immense profits of which would carry the company for years.  Five years later Atari would create the Video Computer System (later renamed the 2600) home console, which initially struggled but would eventually come to define home video games after the licensing of the Taito/Midway hit arcade game Space Invaders for the games machine.  Bushnell eventually sold Atari to Warner Communications, and was muscled out by management in 1978.  The name Atari became synonymous with home video games, with the company ruling the roost until the great video-game crash of 1983-1984 would utterly destroy the entire industry.

Atari was eventually split into two companies: industry stalwart Jack Tramiel, fresh off his departure from Commodore, would pick up the consumer division of Atari in 1984 to form Atari Corporation, with Warner continuing the arcade division separately as Atari Games, Inc..  They would eventually sell to Namco in 1985.  The Tramiel-led Atari would move more deeply into computers with the Atari ST line, while Atari Games made such arcade games as Marble Madness (1984), Super Sprint (1986) and Hard Drivin’ (1989).

Tramiel eventually merged Atari Corp with hard drive manufacturer JTS, who in turn sold remaining assets to Hasbro in 1998 for a paltry 5 million dollars.  French software maker Infogrames would end up purchasing Hasbro in 2000, and rebrand the entire company using the Atari, Inc. name in 2001.  Coming around in a neat circle, Nolan Bushnell eventually joined the board of Atari in 2010.

So raise a glass to the company that created the video game industry, 40 years young today.

As always, for more history of Atari and the games that helped define it and the rest of the video game landscape, consult your local The Dot Eaters article.

Gamasutra has a great article on how Scott Murphy and Mark Crowe, creators of the venerable Space Quest adventure game series during the heydays of Sierra, managed to bury the hatchet and end a 20-year estrangement to work together on the new Kickstarter project that you can help fund.

As always, you can read about the history of Space Quest and Sierra in our Dot Eaters article here.