Imagine if everything ever written on a typewriter had been written by the guys who invented the typewriter.

Jumpman. Pitstop. Summer Games. Just a few of the classics from the library of Epyx, a company that produced computer games from 1983 to 1989. Its roots started with Automated Simulations, founded by Jim Connelley and Jon Freeman, releasing such D&D inspired computer games as the Temple of Apshai series, as well as Starfleet Orion and its sequel, Invasion Orion.

When the company morphed into Epyx, the focus was moved towards more action-oriented fare, to great success.  Epyx had a staff of 200 and revenues of 9 to 10 million dollars annually at its height, but projects such as the Handy colour hand-held gaming system, later sold to Atari and released as the Lynx, helped dragged the company down into bankruptcy in 1989.

The IP from Epyx is ripe to be updated and ported to modern systems, and people like Davis Ray Sickmon, Jr. are stepping up to the plate.  Sickmon, Jr. is currently running a Kickstarter campaign to produce a modernized version of Jumpman, first for the Ouya platform, and eventually for Android and iOS devices.  You can check out the project and throw some coin its way here on Kickstarter.

As always, for more information on Epyx, Jumpman and other great games by the company, consult your local Dot Eaters entry.

WarGames was released to theatres on June 3, 1983, in midst of the cold war between the U.S.A. and the Soviet Union. Starring Matthew Broderick in his second major film role, it followed the exploits of David Lightman, a high-school kid who’s desire to hack into the computer system of a video game company leads him into NORAD’s war plans computer. His hijinks then unknowingly hurtle the world towards nuclear annihilation.

Lawrence Lasker and Walter Parkes wrote the screenplay, inspired by the many glitches and close calls that had nearly resulted in the accidental deployment of nuclear weapons between the two superpowers.  The original draft of the script was called The Genius, about an alienated hacker teen and his mentor, a dying scientist based on real-life astrophysicist Stephen Hawking.  The scientist character eventually morphed into Stephen Falken, played in the finished movie by english actor John Wood.  Perky Ally Sheedy, along with perpetual prick Dabney Coleman, helped round out the cast.

Another star of the movie was the NORAD command center, which at the time was the most expensive single set ever made.  Its centrepiece was an array of huge screens, onto which filmed clips of computer vector graphics representing the various geopolitical locations and situations around the world were projected.  An Apple II computer kept 12 35mm projectors in sync during filming of the scenes in the NORAD set.

WarGames, while stretching belief at times, is a fun film that moves at a nice, brisk pace. Along the way it manages to makes a few lasting comments about the technological genie-in-a-bottle that computers represent, as well as the futility of nuclear war. The countries of the world can face off in a dangerous game of nuclear brinkmanship, or maybe instead…

How about a nice game of chess?

For more on the making of WarGames, consult your local Dot Eaters article.

Today, Nov. 15, 2013, the latest in modern console gaming drops. The Playstation 4 features 8G of RAM, a 1.84 teraflop graphics chip, a 500G hard drive and an eight core CPU running somewhere in the neighbourhood of 1.6 GHz per core.

Now, follow me back through the murky mists of time.  Here, just put your hand on my arm, I’ll lead you through. Watch out, don’t trip over that original Playstation, it’s grey and hard to see in this fog.  Look, there’s Panasonic’s 3DO Real console, that monster is hard to miss. Be careful not to trip over those joystick cords for the Atari VCS.  Wait… ah, here we are. 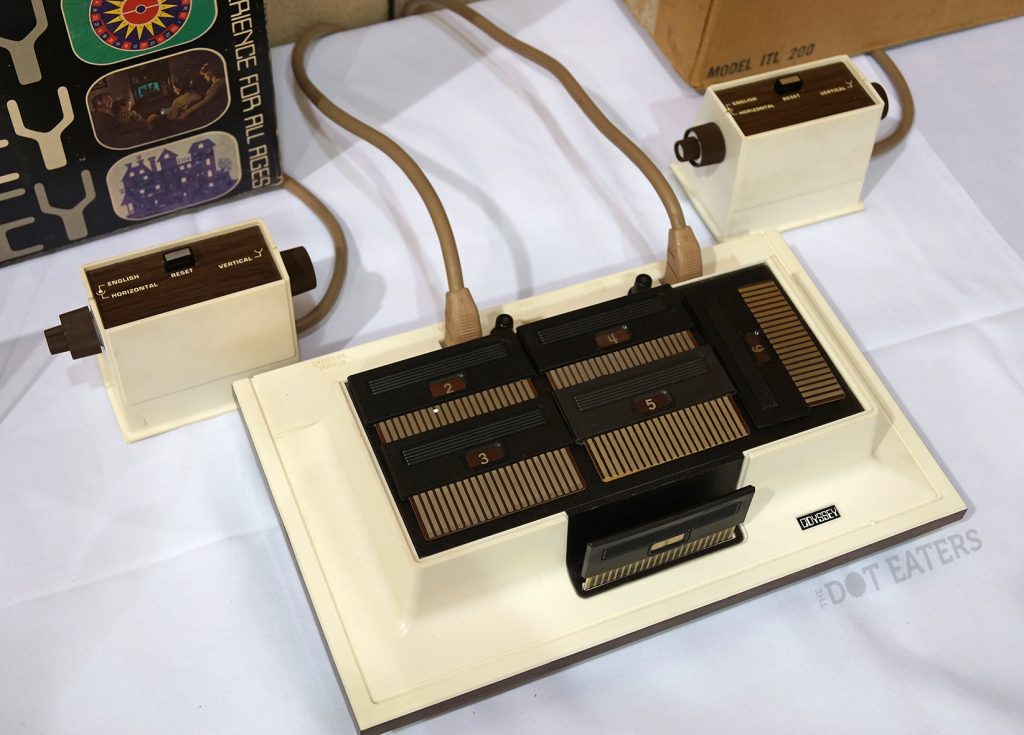 Odyssey with controllers plugged in, and game cards

The Odyssey, released by Magnavox in 1972. Developed at military contractor Sanders Associates by Ralph Baer, it was the very first home video game console. The Odyssey didn’t have gigabytes of RAM, nor a graphics processor, nor a multi-core processing unit.  It didn’t have ANY CPU or any of that other stuff; inside it was a board made up of discreet components like capacitors, resistors and transistors. Its black and white graphics were so rudimentary that packaged with the console were mylar overlays you would slip onto your TV screen to simulate various backgrounds.  You then played virtual Ping Pong, or shot at dots with an available light gun accessory. The Odyssey didn’t transport you onto a fully-rigged sailing ship as you plied the green waters of the Caribbean, nor did it place you on a frantic battlefield full of soaring jet fighters or rumbling tanks. 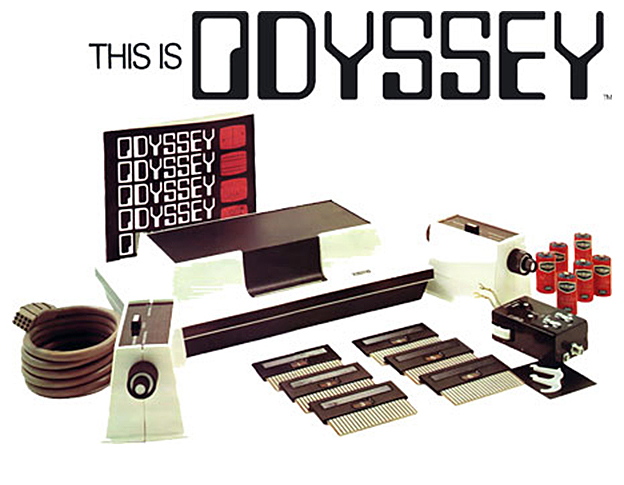 The Odyssey did, however, take the first tentative step towards those later worlds.  It was the starting point, with the PS4 and Microsoft’s Xbox One as the current destination. We will keep moving forward, but on these occasions, it’s good to also take a look back at where we’ve been.

For more information on the Odyssey, consult your local Dot Eaters article.

The 7800 was Atari’s follow-up to the 5200 Supersystem, and was originally announced in 1984. Unfortunately, when ex-Commodore head Jack Tramiel took over the consumer division of Atari that year, he froze almost all video game projects to focus instead on the company’s 16-bit computer line.   While the 7800 might have been a force to be reckoned with in 1984, the video game landscape had changed substantially by its eventual release in 1986, and Atari’s console struggled to make an impact in a market where heavyweights Nintendo and Sega were duking it out.

The ProSystem sold over 3.5 million units in four years, and produced some pretty good home translations of arcade hits like Dig Dug and Xenophobe.  The gaming world, however, had moved on to the sprawling, original worlds of Super Mario Bros..For more on the history of the Atari 7800 ProSystem, consult your local Dot Eaters article.

Gamercamp, a festival for independent video games from Canada and around the world, has wrapped up for another year here in Toronto. It was a fantastic amount of fun, with a wide array of games that pull you in and keep you wanting more. The public portion of the event was called the Pop-Up Arcade, and the name is apropos: You might remember walking into a video arcade back in the day and being welcomed by a room full of games that were incredibly diverse, where it wasn’t just a bunch of one-on-one fighting games or lightgun shooting galleries like today.  The collection of independently produced games on display every year at Gamercamp brings back that feeling of wonder and excitement of the classic arcade. Here’s some highlights of my visit:

END_OF_DOCUMENT_TOKEN_TO_BE_REPLACED

I’m excited about Gamercamp starting today.  It’s a giant indie video games festival here in Toronto, running from Friday, Nov. 1 to Sunday Nov. 3.  It’s so big, that this year it is taking up all the floors of Hotel Ocho, located just north of Queen Street on Spadina.

From the intimate Salon Series of lectures from people in the games biz, to Friday’s all-day summit conferences, to the rollicking arcade and demo areas… there is lots to do and see for anyone even remotely interested in the indie games business, heavily influenced by the classic video games that came before. You can even get a taste of next-gen with some time on the Playstation 4.

Things that go around, come around, and in the art and sensibilities of today’s independent video games one can definitely trace a line back to classics like Williams’s Defender and Konami/Stern’s Tutankham.  At Gamercamp, you can see where it all has led.  Hope to see you there too.