If you disagree with me, you do so at your own peril.

Trip Hawkins, 3DO president, to the editors of GamePro magazine
Skip to content

Activision saw the writing on the wall for video game consoles in 1983. That was the year they pivoted from consoles onto computer platforms, porting popular hits like Kaboom! and River Raid to the Atari 8-bit XL line, as seen in the ad featured today in the Cortex. 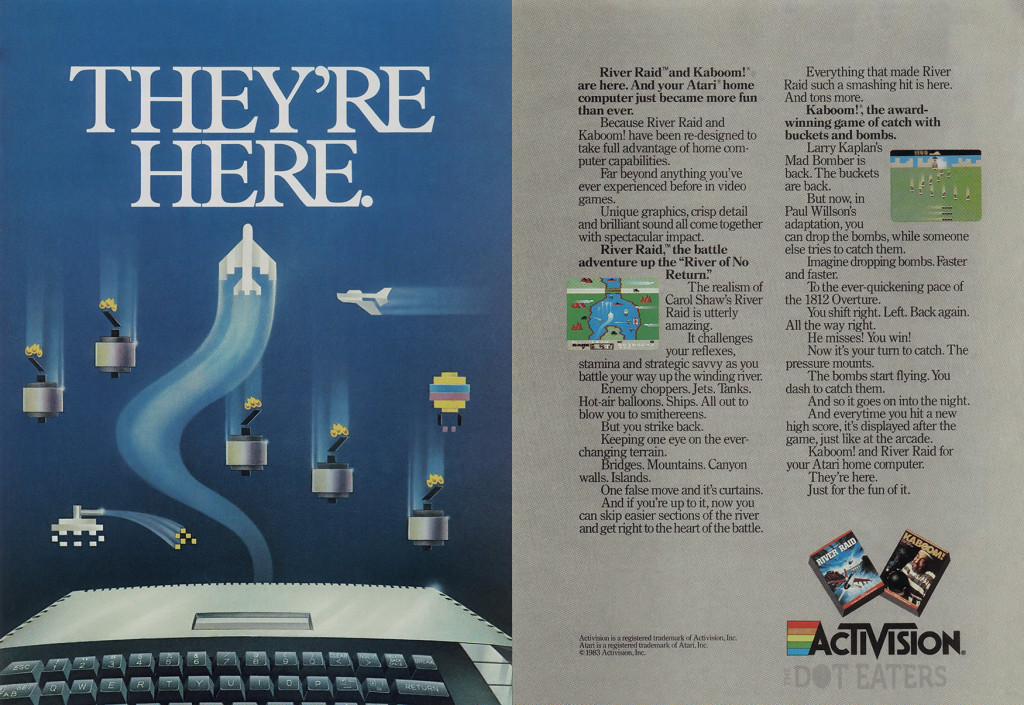 Activision makes their move to computers.

Moving to computers helped the storied company survive the big video game crash of 1983-84, allowing them to become one of the biggest video game companies operating today.

For more information on the history of Activision and the Atari 2600, consult your local Dot Eaters entry.

July 13th was the 30th Anniversary of the release of The Last Starfighter to theatres.  How times flies while you’re saving the universe.

TLS was a bit of bubble-gum pop cinema about young teenaged handyman Alex Rogan, played by film newcomer Lance Guest, spending his days keeping the Starlite Starbrite trailer park together. Denied a student loan needed to attend college, Rogan’s only escape from his plight is obsessively playing an arcade game called Starfighter, installed at the park’s snack bar. With the park’s populace gathered behind him cheering one night, he breaks the record on the game. Later he is approached by the game’s inventor, played by Robert Preston. This man turns out to be a con-man from outer space named Centauri, who wisks Alex away to be conscripted to fight in defense against encroaching tyrants.  At first refusing this invitation, an assassination attempt convinces Rogan he might be his world’s, and indeed the universe’s, only hope for freedom. Joining Guest and Preston is 80’s sweetheart Catherine Mary Stewart as Rogan’s love-interest Maggie, along with veteran character actor Dan O’Herlihy as fan-favourite Grig, the lizardly pilot who is part wise mentor and part comic-relief.

Another star of the show is the Gunstar, a lethal spaceship created entirely by computers. TLS picks up the baton where Tron left off, featuring the most CGI in a film up to that point. With 27 minutes of photo-realistic computer effects, the movie helped further the technology down the road towards becoming standard practise in filmmaking.

The movie didn’t exactly burn up the box-office when it was released on July 13, 1984. However, the lasting effect it had on moviemaking technology, along with sterling performances from Preston and O’Herlihy, makes it an important and charming ride through the stars with Alex, Centauri and Grig.

For a complete history on the making of The Last Starfighter, consult your local Dot Eaters entry.