I believe the nature of the medium prevents it from moving beyond craftsmanship to the stature of art. 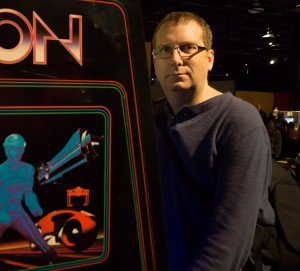 Greetings, programs! Here’s hoping I don’t get zapped into the Grid

My name is William Hunter, and I run things here at The Dot Eaters, a website that chronicles the history and progression of video games from early pre-PONG systems up until the big video game crash of 1983-84.

My formative years were forged in the flames of 8-bit gaming systems of the late 70’s and early 80’s such as the Atari VCS (later renamed the 2600, but for me will always be the VCS), the ColecoVision, and early home computers like the venerable Commodore 64.  For over 15 years I’ve developed the site to tell the stories of these games, systems, individuals and companies; researching and writing an extensive textual history, hunting down relevant images, recording videos, and all the other sundry things that go into maintaining a website dedicated to a subject of such breadth as video games.

From what started as a personal passion, The Dot Eaters has become today a trusted source of information about the history of video games. Many books on that topic have referenced The Dot Eaters in their research. Moreover, College and University faculty regularly check the website to look for relevant content. The Dot Eaters has an extensive section about the history of video games, called Bitstory, which is illustrated with many videos and images. It also has a blog called Updates, in which I write about how retro video games continue to resonate in the industry and with players today.

“Video games always seem current, like a ‘new’ thing, but they actually have a history that stretches back over 50 years. The Dot Eaters is one of the best online compendiums of that history, and the site is a tremendous asset for anyone interested in understanding where games have been, where they are going, and what they mean.”
Prof. Ethan Mollick, Wharton School of the University of Pennsylvania
“…the Dot Eaters. Okay, If you’re a 1980s gamer geek, you could easily spend an entire day at this website, which is a comprehensive history of video games, beginning in the years that preceeded Pong, and heading all the way up to the Vectrex/ Atari 7800 years. You know what it feels like? If Ken Burns did a documentary on video games, this material would be the companion book.”
Wil Wheaton at WWdN.net:In Exile, Actor, Writer, Gamer
“The Dot Eaters is an invaluable resource for anyone interested in the history of videogames — or in the history of games in general. The site provides a wealth of information, images, anecdotes, and other trailheads for discovery that is without parallel anywhere on the web. William Hunter has created a wonderful source of inspiration and knowledge for artists, students, and educators alike!”
Jeff Watson, Assistant Professor, Interactive Media and Games, USC School of Cinematic Arts
“The Dot Eaters is always one of the first places I send my undergraduate students when we learn about video game history. This is because the site is accessible, informative, and insightful. It importantly engages the varied nuances of video game history while approaching that history in multiple ways; it is at once a history of technology, a history of individuals, a history of important works, an industrial history, and a personal history. And, accomplishing all of this, it is anything but dry. William Hunter’s prose has a sense of humor to it, and an awareness of the importance of video games to contemporary culture. Hunter utilizes the diversity of the Internet to the site’s advantage, pairing historical detail with images and videos that nicely complement the discussions of games and their creators. I’ve found The Dot Eaters to be an invaluable resource to both teach with and learn from.”
Harrison Gish, Doctoral Candidate, Cinema and Media Studies,
University of California, Los Angeles
Where did the idea of the website come from?

The beginnings of the The Dot Eaters came from a combination of my penchant for playing and collecting the classic video games I grew up on, and my viewing of Nerds 2.0.1: A Brief History of the Internet, a fantastic 1998 PBS documentary hosted by Robert X. Cringely. These events caused me to wonder about the history of these great games that I was recapturing from my youth. When I poked around the Internet, I found a couple of sites that dealt in the history of these games, but not really in the breadth of detail that I was looking for. So I decided to create my own website. That’s how it started.  But what keeps me at it, aside from the comments I receive from you, Dear Reader, is the idea of the ever-expanding gulf between what was a videogame then and what is a videogame today, along with my personal experiences while crossing that chasm.

How did you get into video gaming?

Reading the Sears Christmas Wish Book to tatters was one of my childhood rituals that I think most of us can identify with. My life as a gamer started this way. I was scoping through the Wish Book one day while riding home in the car with my mom and, in the most casual voice I could muster, posed the idea that perhaps I could get the Atari game here on this page?  She replied with: “Well, maybe,” which was about a thousand times more positive of a response than what I was expecting. That Christmas, so probably in 1980, I got my Atari VCS. To make a long story short, after a couple of years I sold the Atari for about a 50 percent loss. Then I bought a ColecoVision, again sold that for a hefty loss and bought a Commodore VIC-20. Next came the vaunted C-64 before moving to the Amiga. Then I built my own gaming PC’s for years upon years before the day I lined up on a cold November morning outside of Best Buy with a couple hundred other maniacs on the launch day of the revolutionary Nintendo Wii in 2006.  Along the way, I decided to start chronicling the history of the industry I was partaking in.

Enough about video games!  We want more about you!

Ah, thanks for asking.  Since starting the site to do that in 1998, an incredible amount of change has happened; in the online medium I was telling these stories in, the video game industry itself and in my own personal life. I now live in Toronto with a wonderful wife and two great kids, developing The Dot Eaters on my trusty Mac. It looks a bit different than the model of Macintosh computers that came out the year the site first went online… 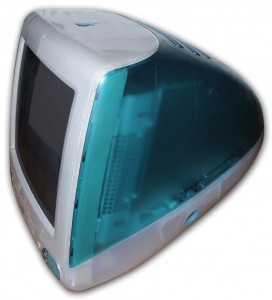 I hope you’ll enjoy the website!  Eventually I plan to progress the Bitstory section into the “modern” era of gaming, so if you have a system or game you’d like profiled, feel free to drop me a line from the Contact Us page.  For now, do come back soon to check out the latest blog posts and articles.