Only after you’ve experienced the sheer joy of slaughtering your best friend will you know the true meaning of fun. 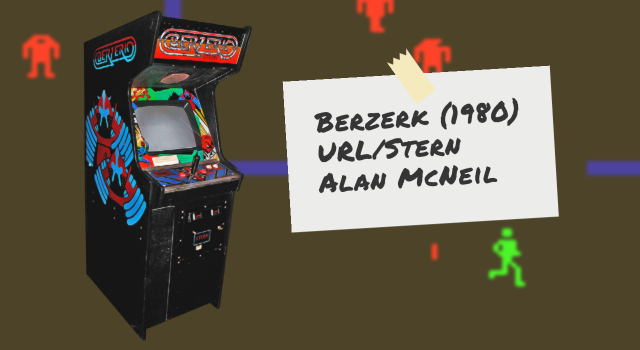 Yet another Chicago-based pinball company, Stern Electronics enters the arcade videogame scene in 1980 with a creative spin on Space Invaders called, not-so-creatively, Astro Invader. Their sophomore effort storms the industry with a vengeance the same year, titled Berzerk. Stern is founded by Sam Stern, who forms the company out of the ashes of Chicago Coin, a pinball and arcade amusement company started in 1932 and eventually entering bankruptcy in 1977. Stern employee Alan McNeil has just finished work assisting on pinball game Meteor, a tie-in game with the 1979 special-effects extravaganza movie of the same name by American International Pictures. With its success, Stern brass then decide McNeil is ready to take on the video game market. Working at Stern subsidiary Universal Research Laboratories in the suburbs of Chicago, McNeil has an idea for a game based on a dream he has had of playing a B&W robot game, as well as reminisces of the classic BASIC game Robots (aka Daleks in the UK, from the salt-shaker shaped villains in their popular SF TV series Doctor Who). McNeil also draws inspiration for the game from Fred Saberhagen’s Berserker series of SF novels about a race of murderous robots built by ancient beings, designed to destroy all life, and the band of Earth descendants who battle them. While games like Atari’s Indy 800 and Namco’s Galaxian have ushered in colour graphics, Stern amazingly sees colour as a fad and Berzerk‘s video hardware initially matches McNeil’s black and white dream. But as more colour games start hitting the market, the system is quickly retooled to follow suit. 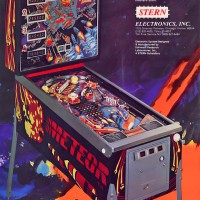 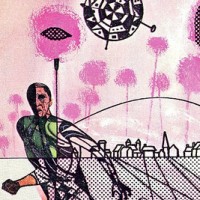 In the game the player guides the onscreen runner through a maze of up to 64,000 randomly created rooms (if they can last long enough to see them all) while avoiding the indigenous population…up to 11 robots each screen, spewing laser death. The humanoid must make his way past his adversaries to the exits at the top and sides of each screen, armed with only his own laser gun, his intelligence and an 8-way photo-optical joystick. The robots, however, are as dumb as posts…they often get in the way of each other’s shots or bump into one another, all such actions causing quick disintegration. Also for the player to avoid are the electrically charged walls, which spell destruction for all who touch them. And added to the mix is Evil Otto, pure malevolence in the form of a smiling, bouncing ball, used by McNeil in lieu of a forced time-limit to keep players from loitering in a room after the robots have been eliminated. He gets the name from Dave Otto, a sadistic security chief who had terrorized the Berzerk creator during his tenure at game maker Dave Nutting Associates, by locking McNeil and his fellow employees out of the building to enforce a noon-hour lunch, as well as piping “beautiful” music into every room. As the game progresses the robots get faster and Otto makes his appearance sooner. If the player is able to get one of the top five high scores, in a video game first it will be immortalized by a battery backup system that preserves them even if power to the cabinet is unplugged. Along with some impressive character animations on the running humanoid and the shifty-eyed robots, Berzerk features groundbreaking speech synthesis, in the form of a National Speech microchip. A 30-word vocabulary is used for the phrases, such as “Intruder Alert! Intruder Alert!”, “Chicken, fight like a robot!”, “Destroy the humanoid”,”The humanoid must not escape”, and the famous attract mode accusation “Coins detected in pocket!”. It isn’t a massive vocabulary, but with the cost of digitization at $1000 a word it’s the best the company can afford.

During the test-market phase at a Chicago singles bar, Berzerk proves to be a major attraction indeed. After causing show buzz with its premiere at the October 1980 AMOA in Chicago, the release of Berzerk soon after has it go on to become the biggest arcade hit for Stern, selling upwards of 50,000 units. A new building and three shifts are required to keep up with demand as 300 units are produced a day. This in spite of the dodgy optical joystick with the game that has to eventually be replaced by a Wico stick.

Some gameplay of the arcade version of Berzerk, 1980 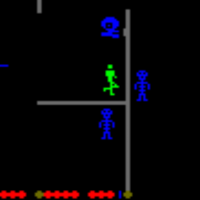 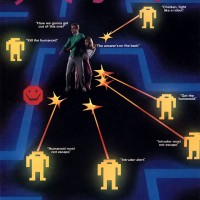 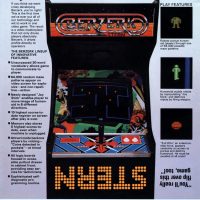 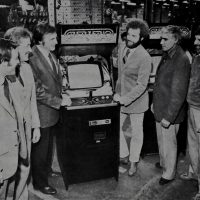 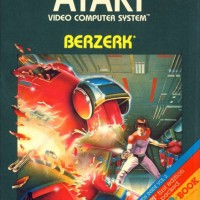 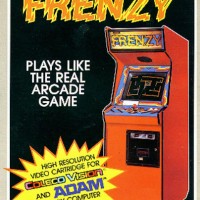 Unfortunately, Berzerk also goes down in the history books as the first videogame to apparently kill people. The first case is 19 year-old Jeff Dailey, who suffers a massive heart attack after posting a score of 16,660 on a Berzerk machine in January 1981. 18 year old Peter Burkowski is in Friar Tuck’s Game Room in Calumet City, Ill. for about 15 minutes at around 8:30pm Saturday April 3 1982, and puts his initials up twice on the high score list on the Berzerk machine there. He turns and puts a quarter into another machine, then falls to the ground. He is dead within half an hour. The cause of death is a heart attack, and while an autopsy finds previously undetected scar tissue at least two-weeks old on Burkowski’s heart, the coroner does not rule out prolonged stress from the videogame as the triggering factor. The Burkowski incident later becomes fodder for right wing cranks such as Phyllis Schlafly in their support of laws to ban videogame sales to minors. 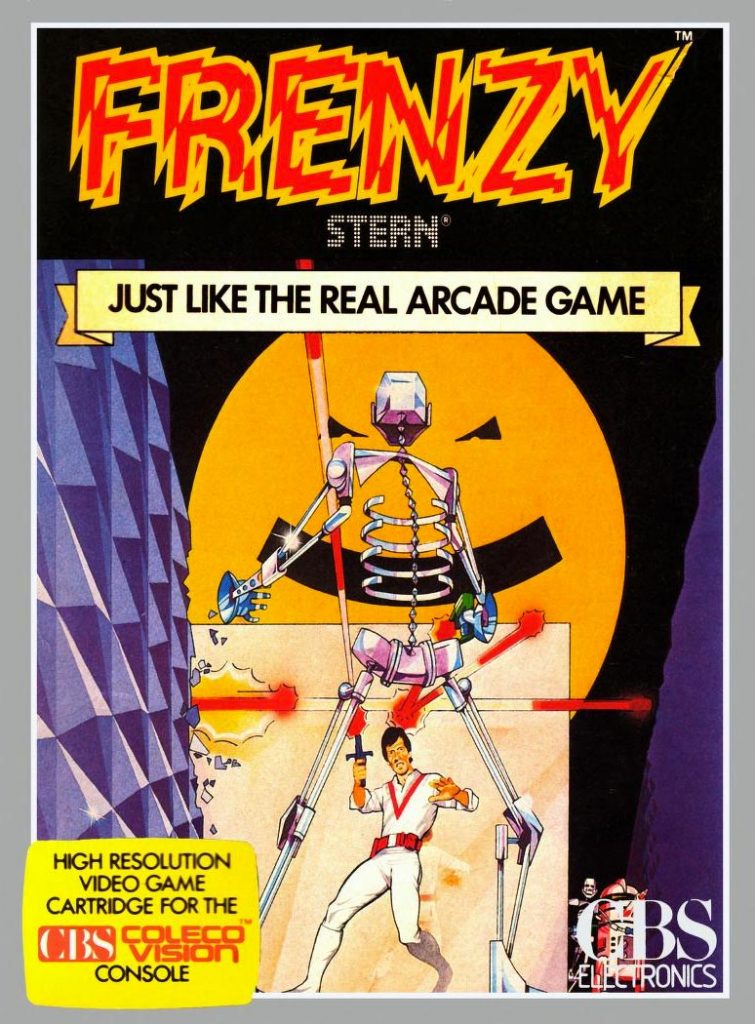 Space man in cardigan fights metal skeleton in a glass maze under the malevolent gaze of a smiley face. Who says video games are abstract?! Frenzy port to ColecoVision, released in early 1984

Despite the negative PR (which, lets face it, probably increases sales), Berzerk is followed by sequel Frenzy in 1982, also designed by McNeil under solicitation by URL even though he has left the company by this point, in order to use up surplus circuit boards left from Berzerk. It sports a slight increase in graphical quality, along with play improvements like walls you can shoot through, improved robot AI, reflecting laser shots and multiple Ottos. 3000 units are eventually shipped. In 1982, Atari licenses Berzerk for their home consoles for a cool 4 million dollars and produces an amazingly faithful home version in August for the 2600 resulting in a big hit. Alan McNeil’s salary for that year? $30,000. The game also runs over to the vector graphics home console Vectrex that same year, as well as a port for the 5200 in 1984. Frenzy hustles onto the ColecoVision in early 1984. 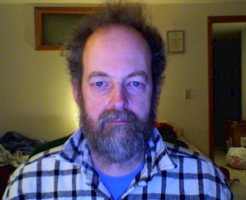 McNeil goes on to further fame, however, as creator of Macromind’s Director and MediaMaker programs, which then evolve into MacroMedia, and eventually are folded into Abode’s Creative Suite bundle of media manipulation programs. While Stern themselves never quite reach the upper echelon of game producers like Atari and Midway, they are however one of the bigger secondary players in the arcade market, with titles including Astro Invader (1980), Scramble (1981), Super Cobra (1981), Amidar (1982), Bagman (1982), Pooyan (1982), and Tutankham (1982). They also ride the laser game fad with the anime-based Cliff Hanger in 1983. 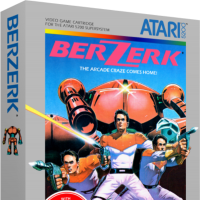 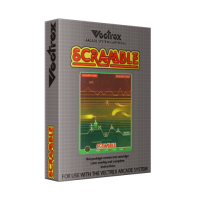 Scramble, an arcade game released by Stern in NA, scrambled over the the Vectrex in 1982 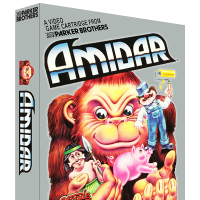 Amidar, an arcade game released in NA by Stern, hopped over to the 2600 console in 1982 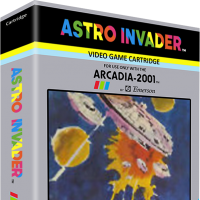 Astro Invader, released by Stern in NA, dropped onto the Arcadia 2001 in 1982 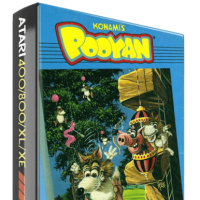 Pooyan was an arcade game released by Stern, and lowered onto Atari 8-bit computers in 1983 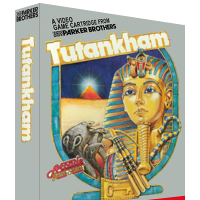 Tutankham, an arcade game released by Stern in NA, was uncovered on the 2600 in 1983

Bagitman, released for the C64 in Europe in 1983, was based on the Stern arcade game Bagman 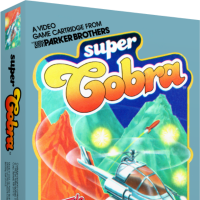 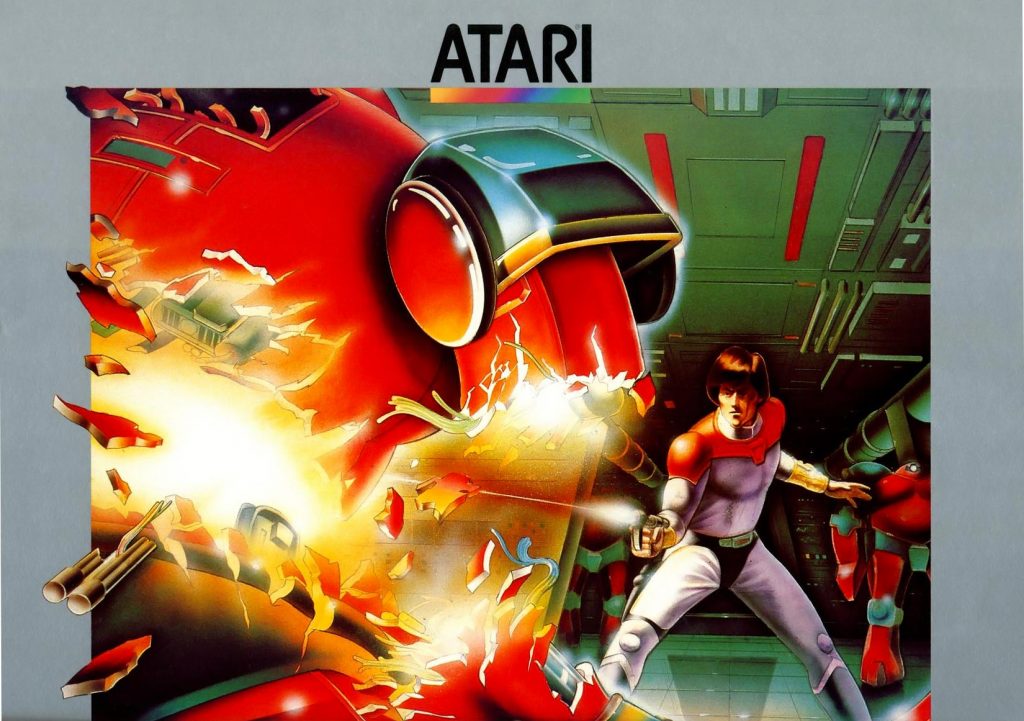